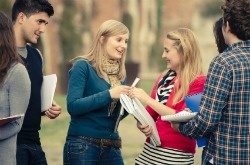 According to the Gainesville Times, the announcement came as a surprise to both students and faculty, although University System of Georgia Chancellor Hank Huckaby had stated as far back as September that regents would look at ways to help schools serve students better, become more efficient, and cut costs through potential consolidation.

Gainesville State College President Martha Nesbitt reported that her staff was shocked by the announcement.

"I had an open meeting in which I tried to assure them that this boded well for our faculty," she said in the Gainesville Times. "We don't have enough faculty as there is so there won't be any layoffs due to the consolidation. I think they were kind of reassured."

Thirty-five colleges and campuses comprise the state's higher education system, according to the Atlanta Journal-Constitution. The proposal does not affect any schools in the metropolitan Atlanta area.

However, the proposal, which still needs to be approved by the state board of regents and is expected to be voted on on Tuesday, could result in administrative and staff layoffs. It is not clear how much will be saved, but Huckaby indicated that times were ripe for the changing.

"We are in a new reality and we can't keeping doing business the same old way," he said in the Atlanta Journal-Constitution. "We need to help more Georgians earn a college degree and this will give students access to more programs and allow us to focus more of our resources on how to best help them."

The consolidation would result in the system streamlining its institutions to 31, but none of the campuses are actually expected to close. In fact, all eight institutions are anticipated to stay open, but will share administrative functions through the new larger combined colleges.

The proposal, if passed, looks at completing consolidation by fall 2013, according to the Atlanta Journal-Constitution.

Inside Higher Ed, however, noted that many campuses struggle with implementing consolidations, even during an economic downtown. One example is a 2004 proposal in Maine to consolidate three schools that failed. Retired Augusta State University professor Michelle Benedict expressed doubts that some of Georgia's schools can successfully merge. Benedict told the The Augusta Chronicle that ASU is a liberal arts and science school and Georgia Health Sciences University has a completely different focus.

"The small view is, it's like close one eye and squint with the other and you might think you'll save money," said Benedict to The Augusta Chronicle. "But it's either going to cost money or kill ASU altogether."