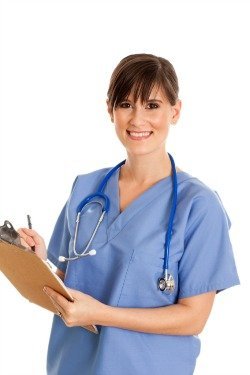 When nursing students at a major Texas university arrived on campus last week, they were greeted with signs warning them against wearing "revealing clothing." While it not unusual for nursing schools to have dress guidelines, My San Antonio reported that the way these particular signs were worded and their emphasis on women's clothing, spurred charges of sexism -- and a major social media backlash.

The signs posted Wednesday in the University of Texas Austin's School of Nursing building warned students that inappropriate clothing "distracts from the learning environment," and is therefore not permitted on campus. What constitutes "revealing" dress? According to the signs, "midriff-baring shirts, short-shorts, short skirts, low-rise pants and low-cut shirts that reveal cleavage." One student snapped a photo of one of the signs and sent it to Jezebel, a popular feminist website where, My San Antonio reported, it generated a lot of buzz. Some people accused the institution of unfairly targeting female students with the new dress code.

"Nurses are routinely sexualized in our culture (and) to see this kind of statement directed toward women who are already going into a field where they undoubtedly know about this sexualization will only create more anxiety for them," Jessica Luther, a UT alumna and activist in Austin, told My San Antonio.

Once administrators got wind of the controversy surrounding the signs, they removed them. According to a statement released by the school and published in full on Tumblr, the school chose to take the signs down because the wording made it sound as if the institution was "worried about women's clothing as a distraction in the learning environment," which was "not an accurate reflection of" the school's policy. The statement noted that the institution is "in the business of educating" nurses, not "measuring skirt lengths."

Houston Press reported a part-time staffer created the signs to serve as what Assistant Dean Gayle Timmerman called "friendly reminders" about the school's long-standing dress code, which was established to promote a professional image both on and off campus. She said the school's official guidelines are not intended to be gender-specific. The student handbook offers similar guidance, she said, including restrictions on shirts that expose the midriff and short shorts.

"Could we state it better?" said Timmerman. "Obviously it hit a nerve with a lot of people."

Luther was certainly among them. She told My San Antonio that the university should "instruct those who are 'distracted'" by students' clothing to simply "stop being distracted" instead of "shaming" or "policing" female students.

"'We made a mistake.' The University of Texas at Austin School of Nursing responds to dress code signage," utaustin.tumblr.com, June 4, 2014, http://utaustin.tumblr.com/post/87813943994/we-made-a-mistake-the-university-of-texas-at-austin