University Websites Are Not Meeting Expectations Of Prospective Students 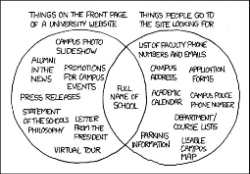 An xkcd cartoon by Randall Munroe has been creating a lot of buzz since it was first published on Friday, said Inside Higher Ed.

The cartoon, which according to bit.ly has been shared nearly 8,000 times, been "liked" 7,500 times and been commented on more than 5,500 times on Facebook as of Tuesday night, is a commentary on university websites. It shows a Venn diagram with one circle identifying "Things on the Front Page of a University Website" and the other circle listing "Things People Go to the Site Looking For". The overlap, or common information, is only the "Full Name of School". Simply put, "university website designers have no idea what their visitors actually want front and center," said Inside Higher Ed.

Although comics are not the typical method of communication in higher education, this particular cartoon has caught the attention of many faculty members and campus techies. "The cartoon is right on the target. College website design typically focuses on what an institution wants to say, not necessarily what prospective students (and others) want to know," said Martin Ringle, CIO of Reed College.

Dylan Wilbanks, a Web producer for the School of Public Health at the University of Washington, agreed. "A university website is a tool for finding answers," he said. He added that the information needs to be findable, which on most sites it is not. He noted that in the late 1990s people wanted to have a website that was "cool". This trend still continues today, but around 2002, Wilbanks said people started adding lots of random information to their sites. He called this the "web as bulletin board" approach. "University websites, for the most part, have been a combination of these two things," he said.

Bob Johnson, president of the higher ed marketing firm Bob Johnson Consulting, echoed Wilbanks' sentiment. Johnson told Inside Higher Ed that people come to university websites to complete a specific task such as finding information on majors and courses. However, based on his firm's usability surveys, "confusing links and pages and ineffective search tools" have consistently been barriers to retrieving that information.

According to Johnson, feedback from focus groups is rarely used when designing the blueprint of a website. Mark Greenfield, director of Web services at the State University of New York at Buffalo and associate consultant at higher ed consulting firm Noel-Levitz, added that it can be difficult to have a good website design and satisfy prospective students, current students, parents, faculty, staff and alumni as getting funding for such extensive research is not easy.

Furthermore, Johnson stated that modern websites are jam-packed with links for "internal bragging rights", not usefulness. According to Greenfield, different departments want to show off and often fight for a presence on the homepage.

Wilbanks, however, warned that this approach may turn users off. "If your audience is prospective students, and they just want to know if you offer their degree and how to apply, and you're shoving videos and missions statements in their face rather than giving them a route to the application form they want to fill out, you will lose [them]," he cautioned. Indeed, a recent survey by Noel-Levitz found that 1 in 4 students would remove a school from their prospective list if they had a negative experience on the school's website.

Although many schools need to revamp their websites, Johnson told Insider Higher Ed that there are a few that got it right. DeVry University, a for-profit institution, has information on all the majors it offers right on the homepage. "That's very rare on a college or university website, that you can actually see the programs being offered without leaving the homepage," said Johnson.