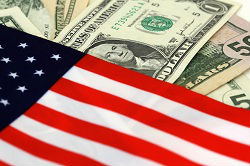 According to the Los Angeles Times, this is the most the economy has contracted since the first quarter of 2009, during the worst stretch of the Great Recession. Analysis from The New York Times suggests several factors may have played a role in this drop, including smaller-than-usual business inventories, harsh winter weather that plagued much of the country earlier this year, and a decrease in overall health care spending.

However, as The New York Times notes, the Commerce Department's report is rather backward-looking, meaning that the analysis, albeit a troubling one, isn't necessarily an indicator of future economic health. Even so, it does mean that future economic growth first has to "catch up" before any bigger gains can be made.

"The economy now must attempt to dig itself out from an even larger hole than previously expected," said Lindsey M. Piegza, chief economist of Sterne Agee, in a research note.

The future of the economy is unknown at this time, however, and even the brightest economists are having trouble making accurate forecasts. That's because consumer spending, a key component of economic activity, has been hard to predict, along with the changing landscape of health care spending since the passage of the Patient Protection and Affordable Care Act. According to The New York Times, the new health care law has been changing spending in the health care sector in ways that are often hard to measure and predict, leaving many economists to throw their hands up.

"Looking forward, the volatility in the measurement of health care services represents a risk to our G.D.P. forecasts," Doug Handler, chief United States economist at IHS Global Insight, told The New York Times. "Since this volatility is not business-cycle related, its impact should be heavily discounted in assessing the general health of the economy."

An article in USA Today also suggests that a dramatic drop in household consumption could be stifling economic growth. Furthermore, exports dropped 8.9 percent, which is far more than the 6 percent drop forecasted by economists.

Still, many believe that the overall economy is in good shape despite this drop. Before the report was released Wednesday, even Goldman Sachs stated that this year "will mark the start of a period of clearly above-trend growth for the US economy."

As USA Today notes, Paul Dales of Capital Economics also downplayed the economic shrinkage, stating that the root of the cause "was still largely due to the extreme weather" and "not a sign that the U.S. is suffering from a fundamental slowdown."

Furthermore, other economic indicators are doing quite well. For example, the U.S. housing market picked up last month, exceeding expectations in many cases. Other factors, such as job growth, consumer confidence, and certain economic activities have also been on the rise in recent months.