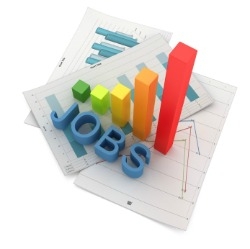 A new report shows that the number of U.S. jobs available at the end of September hit a three-year high, but labor projections remain mixed overall.

The Job Openings and Labor Turnover Survey, which was released by the U.S. Bureau of Labor Statistics Tuesday, showed September job openings increased by 225,000 to 3.35 million overall, according to Bloomberg. This figure represents the highest rate since August 2008, one month before the collapse of Lehman Brothers Holdings Inc. escalated the financial crisis. In the 12 months ended in September, a net of 1.3 million jobs were created. Monthly job openings are often used as a measure of overall labor demand.

While Tuesday's report offers some hope for economic recovery, Reuters noted that the job market remains murky. The number of Americans without jobs has increased by more than 6 million since the beginning of the 2008 to 2009 recession and September's layoff rate was 42 percent.

"Business has done a lot of cutting and got as lean as they could get," said Alan Levenson, chief economist at T. Rowe Price Associates, to The Wall Street Journal. "Job openings are still at low levels in many industries."

According to The New York Times, job openings have grown by 38 percent since June 2009, but hiring has only grown by 17 percent. This disconnect could be the result of a skills mismatch--meaning available workers don't have the skills that employers need--or a sign that employers are still hesitant to fill positions.

Reuters noted that American confidence in the job market could remain low as well. The BLS report indicated that the rate at which people quit their jobs continued to decline--down to 49 percent in the month of September from 51 percent in August, a sign the workers are increasingly wary of their ability to find new work.

Meanwhile, Bloomberg reported that the Federal Reserve projected unemployment will top the 8 percent mark through 2013.