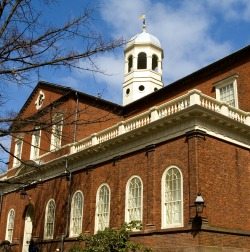 U.S. News and World Report released its 2014 "Best Colleges" rankings on Tuesday. The top national universities -- namely Princeton, Harvard, and Yale, in that order -- likely come as no surprise. However, the ranking changes of lower-ranked schools can be important to note.

The Washington Post observed gains and declines on U.S. News's National University Rankings since the 2010-11 report. Several schools experienced significant movement in rank. San Diego State University, for example, improved the most; the school rose 31 places to number 152. Other significant gains included the Polytechnic Institute of New York University (up 25 to number 128), Boston University (up 15 to number 41), and Northeastern University (up 20 to 49). The last two were particularly impressive achievements, since large gains are less common on the high end of the list. Notable declines include Howard University (down 38 -- the largest decline -- to number 142), University of California - Riverside (down 18 to 112), and University of North Dakota (down 14 to 173).

Potentially contributing to some of those changes is the revised methodology for this year's ranking. U.S. News adjusted the weights of several input factors to more accurately reflect how well colleges and universities educate students. One major change was the reduction in how much weight incoming college students' class rank in high school holds. The number of high school graduates with class rank on their transcripts is declining, as is the importance of class rank in admissions, according to the National Association for College Admission Counseling's 2012 "State of College Admission" report. The importance of standardized test scores, on the other hand, is rising. To better reflect these changes in admissions and the freshman class, U.S. News reduced the weight of high school class standing from 40 to 25 percent of the student selectivity factor and increased the weight of SAT and ACT scores from 50 to 65 percent of student selectivity. The overall selectivity indicator declined in weight from 15 to 12.5 percent.

Another major methodology change was the expansion of the graduation rate ranking factor to include Regional Universities and Regional Colleges. Graduation rate performance compares a school's actual graduation rate with its predicted rate, which is calculated using certain characteristics of the incoming class in relation to college completion (e.g., Pell Grants and test scores). Schools with higher-than-expected graduation rates benefit in ranking.

Despite the new methodology and the fact that U.S. News rankings are widely observed, these rankings might not be an accurate reflection of a college's value. According to CBS Money Watch, the U.S. News rankings put low and middle-income students at a disadvantage. As colleges spend money to attract high-achieving, high-GPA students with merit scholarships and other initiatives, they consequently spend less money on those who need financial aid. Moreover, U.S. News does not factor learning outcomes, post-graduation employment statistics, or the average student debt of graduates into its rankings. As shown in CBS Money Watch, although U.S. News is making efforts to have its rankings more accurately reflect the true value of the nation's colleges and universities, it still has progress to make.