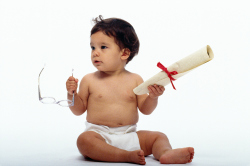 A new report from the College Board showed that the United States is far from achieving President Obama's American Graduation Initiative, which calls for five million more college graduates by 2020. Once the leader in the number of adults ages 25-34 with postsecondary degrees, The New York Times reported that the U.S. now ranks 12th among 36 developed nations. The report warned that the growing education deficit could threaten the country's global economic competitiveness.

Education leaders and policy makers gathered on Capitol Hill to discuss the report and determine ways to boost the number of U.S. grads. The report showed that the problem began long before college. "To improve our college completion rates, we must think 'P-16' and improve education from preschool through higher education," said Gaston Caperton, president of the College Board.

A press release noted some of the challenges the nation's K-12 system faces based on the College Completion Agenda Progress Report 2010: only 47 percent of 3-5 year olds from low income families attend preschool, whereas 60 percent of high income children do. At the high school level, nationally, the student-to-counselor ratio is 467:1, when the recommendation is 250:1, or less. Furthermore, high school counselors only spend 22.8 percent of their time advising students on postsecondary admissions. Roughly 3.3 million 16-24 year olds did not earn a high school diploma or equivalent.

According to The New York Times, almost 70 percent of U.S. high school graduates enroll in college within two years of graduating, but only 57 percent of students enrolled in a bachelor's degree program graduate within six years. Moreover, less than 25 percent of community college students graduate with an associate's degree within three years.

The problem is more severe among low income students and minorities--30 percent of African-Americans ages 25-34 have an associate's degree or higher; less than 20 percent of Latinos 25-34 years old have a postsecondary degree. Students from high income families are eight times as likely as students from low income families to earn a four-year degree by the age of 24.

The U.S., however, ranked slightly better--sixth--among all nations when you factor in older adults, reported The Washington Post. Many fear that today's young adults may be the first generation in the modern era to have less education than their parents.

The Commission on Access, Admissions and Success in Higher Education created a 10-part "action agenda" to help more students complete postsecondary education. The New York Times reported that the first five initiatives concerned K-12 education. The commission called for "more state-financed preschool programs, better high school and middle school college counseling, dropout prevention programs, an alignment with international curricular standards and improved teacher quality. Caperton told USA Today that improving teacher quality is one of the biggest challenges. "It's not only the teaching we saw in the past but it's giving support to the teachers, especially technology. We're not giving teachers the modern things that they need to inspire, to interest, students," he said. The group also identified that more need-based financial aid is necessary as well as more efforts to keep college affordable and, therefore, accessible for all. "I think you've got to think about education as not just an expense but an investment," said Caperton.