U.S. Secretary Of Education Says Teachers Should Be Paid More 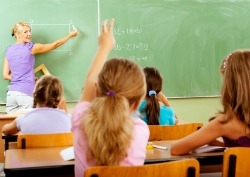 If there's one thing that U.S. Secretary of Education Arne Duncan believes in, it's pay raises for teachers.

Duncan, in an appearance on MSNBC last Friday, indicated he thinks that the average pay wage for teachers should be doubled. Being interviewed on the "Morning Joe" show, he was specifically asked to respond to New York City Mayor Michael Bloomberg's recent ideas to give highly-evaluated teachers -- those ranked the highest for two years in a row -- $20,000 pay raises.

Duncan's response might have raised a few eyebrows; at least they did of Blogger Jason Richwine writing on The Foundry. He described Duncan's position as "unwise." Additionally, he noted that average total compensation for teachers currently comes in at about $55,000, an amount a recent study by The Heritage Foundation noted as not achievable, on average, in the private sector.

Additionally, merit-based pay is something that teacher unions often oppose; in fact, Bloomberg is struggling with a New York City teacher's union right now to include teacher evaluations as part of the contract, the New York Daily News reported. In addition to including merit-based pay as part of the agreement, he also wants to be able to terminate a substantial number of teachers at the city's lowest performing schools.

Duncan, however, did cite one teacher's union, during his Morning Joe appearance, that does support merit-based pay. That's the American Federation of Teachers in Delaware. Yet, its president, Randi Weingarten, has strong feelings about the topic itself--clearly indicating that compensation for improved test score results is inappropriate.

"There's a big difference between giving a couple of people a lot more money based on test scores and upgrading the entire profession," the New York Daily News quoted her as saying.

Duncan also did not clarify how increases in merit-based pay could be funded. He was, however, firm overall in his opinion that teachers are in need of more incentives, particularly those teachers working in inner-city and rural areas and in areas such as math and science.

"We have to recognize and reward excellence," he was quoted as saying in Politico.