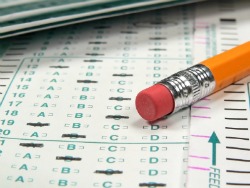 American high school students are lagging behind their global peers in test scores, recording average marks in most subject areas, according to results released Tuesday by the U.S. Department of Education.

The test, called the Program for International Student Assessment, has been administered every three years since 2000 to 15-year-old students across the world, The Wall Street Journal reported. The achievement test, coordinated by the Organization of Economic Cooperation and Development, was given to students in 60 countries last year.

American education officials expressed disappointment with the average to sub-par results, renewing their goal to improve student performance in the next few years.

"We're in the middle of the pack; that's not where we want to be," said Stuart Kerachsky, deputy commissioner at the National Center for Education Statistics, an arm of the Department of Education that administers the PISA test in the U.S.

The test--which measures aptitude in reading, mathematics and science--is designed to compare the academic performance of students from different countries. It is translated into the language of each participating country; students taking the test are randomly selected. In nearly all the countries, a minimum of 4,500 students are tested, except for very small nations.

According to The Washington Post, the report revealed that South Korea, Finland, Singapore and the Chinese city of Shanghai are emerging academic powerhouses, performing significantly better than the organization's average. American students, however, did not.

"For me, it's a massive wake-up call," Education Secretary Arne Duncan said. "Have we ever been satisfied as Americans being average in anything? Is that our aspiration? Our goal should be absolutely to lead the world in education."

According to The Sydney Morning Herald, Shanghai students led test scores in all three categories. Most notably, their average mathematics score of 600 left other students trailing nearly 40 points behind.

Education officials recommended reevaluating the significance of Shanghai's exceptional performance, mentioning that its scores are not representative of educational trends in China as a whole because the tests were given to only sections of the country.

According to Long Beach Press-Telegram, cultural mores and socioeconomic necessities may play a part in motivating Chinese students to excel in standardized testing.

"The children in cities are almost all 'only-children' and they are the only hope for their families' future," said Vanessa Fong, a Harvard Graduate School of Education associate professor who studies Asian education systems. "It's that child's education that can enable attaining the very basic life necessities--housing, medical care--for themselves, their parents and their children."