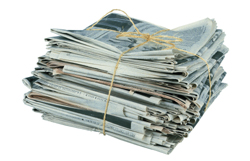 In an effort to regain its footing in a rapidly changing digital marketplace, USA Today announced its plan for major organizational restructuring.

According to The New York Times this is the most extensive reorganization in the paper's 28-year history. Although USA Today is the second most widely circulated newspaper in the country, it has lost over 200,000 daily readers in the past year, reported Bloomberg Businessweek. Like many other print media companies, USA Today has been struggling with declining circulation and decreased revenue in today's increasingly digitized world.

The Wall Street Journal reported that USA Today had an average paid circulation of 1.83 million in the six months through March, which is a 14 percent drop from the same period a year ago. This decline was primarily due to a decrease in the number of copies sold through partnerships with hotel chains, which is more than half of the paper's total circulation.

Furthermore, the paper was also hit by declines in advertising revenue. In 2009, ad revenue declined 29 percent.

The reorganization will de-emphasize the paper's print brand and focus more on digital content. The shift in priorities will result in the reduction of approximately 130 full-time employees, or about 9 percent of its 1,500 workforce, this fall. According to Media Life, the paper will now focus on all platforms--Web, mobile, iPad and other digital formats. "This significant restructuring reflects USA Today's evolution from a newspaper company to a multi-platform media company," said David L. Hunke, President and Publisher of USA Today in the press release.

The newspaper also announced the establishment of USA Today Sports, which The New York Times speculated is "a de-emphasis on the news coverage that has been a focus of USA Today's daily report". According to the press release, this will be a national brand and will provide sports coverage from both USA Today and other Gannett news outlets.

Furthermore, five new departments have been created with new executive management positions. Media Life added that editors will no longer oversee sections. Instead, the paper has opted for content rings that will focus on different subject areas. As reported by The Wall Street Journal, Susan Weiss was named executive editor of content and will work closely Rudd Davis, founder of the sports website BNQT.com and now vice president of business development at USA Today. Davis will work with the news side to ensure that content meets advertisers' needs, a move that some feel may be a conflict of interest. Some worry that readers may think content is influenced by ad revenue because of this collaboration. However, USA Today spokesman Ed Cassidy said, "Under no circumstances will there be any compromise whatsoever in our editorial integrity."