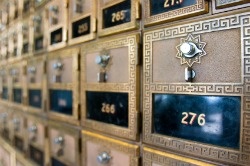 Thousands of Postal Service workers may soon find themselves without a job.

Due to severe loss in revenue as customers increasingly turn to computers for most postal needs, the U.S. Postal Service is considering closing 3,653 post offices, a move that could potentially save $200 million, reported The Wall Street Journal.

"We've lost a tremendous amount of first class mail; it's down 28% in the last four years and that's what pays the bills; that's what pays for six days of delivery," explained Postmaster General Patrick R. Donahoe.

According to a press release, more than 35 percent of retail revenue comes from expanded locations, such as grocery stores and ATMs, which suggests that customers no longer have a need for a physical post office. Furthermore, as CNN Money reported, the Postal Service suffered an $8.5 billion net loss in fiscal year 2010, which is significantly higher than the $3.8 billion loss the prior year. Last quarter alone, the Postal Service lost $2.2 billion. The Wall Street Journal also reported that, on top of these losses, the agency is required to pay $5.5 billion a year to cover future retiree-health benefits.

The 3,653 offices that made the list were considered to have the "least amount of foot traffic and retail sales." Still, before any office is actually closed, the agency will examine workload and hold communities meetings to discuss alternatives.

Donahoe told The Washington Post that some 4,500 workers may lose their job. The Postal Service has already reduced its workforce by 130,000 employees in recent years to save money.

"We've made heroic efforts to take costs out of the organization while providing continuing service," said Donahoe.

As noted in the press release, some post offices will be replaced with Village Post Offices. These offices would be operated by local businesses, such as grocery stores, pharmacies or other appropriate retailers, and would offer basic products and services such as stamps and flat-rate shipping.

"The Postal Service of the future will be smaller, leaner and more competitive and it will continue to drive commerce, serve communities and deliver value," Donahoe said.

Most states and the District of Columbia will be affected by the closures. USPS released the list of offices it plans to evaluate earlier today.