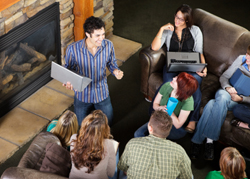 The impromptu seminars feature professors and sometimes local community leaders, who talk about exciting eclectic topics that are often left out of classroom curricula, reported The Cavalier Daily. Past topics included "Is Google Making Us Stupid?", "Liberal Arts in the Era of Late Capitalism" and "To Be Modern and Completely Dependent on Money", noted The Washington Post. Laura Nelson, one of the originators of the idea, said the time, place, speaker and students are always different at each seminar; however, the goal always remains the same: "to find learning outside the classroom".

UVA's flash seminars started when Nelson, like many other UVA students, felt bogged down by extracurricular activities that made learning outside the classroom sometimes impossible.

"I found it difficult to find an intellectual community here," explained Nelson.

As a result Nelson decided to quit some of her nonacademic extracurricular activities and focused on the intellectual capital that UVA had to offer. In fall 2009, she launched Engage UVA, a weekly email that listed scholarly events on campus. Classmate Anna Duning eventually built the email into a newsletter with a subscriber base of more than 1,000 people.

"We realized that there's a lot of interesting stuff going on at U.Va.--and really every university--that a lot of students don't have a chance to experience," said Nelson to The University of Virginia Magazine.

According to The Washington Post, seminars fill up quick and usually have a waiting list. Students have different reasons for participating, from pure interest or curiosity in the topic to simply wanting to hear a lecture from a top faculty member.

Professors also seem to welcome the opportunity as it allows them to teach interesting topics and interact with students who genuinely want to listen and learn, not just earn credits or good grades.

"What I love about it is, it's purely for the love of learning," said university president Teresa Sullivan.

William Hitchcock, who led a Veterans Day seminar called "Soldiers and the American Imagination", agreed. Teaching the flash seminar was one of the highlights of the semester for him because students arrived with "a sort of open mind and an enthusiasm that teachers just love".