UVA Study Examines Impact Of The Recession On American Marriages 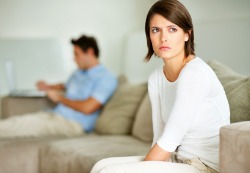 A new study has concluded that the recession has both "stressed and strengthened" American marriages, finding that the more economic stress couples face, the less happy they are, The New York Times reported.

The study, conducted by the National Marriage Project at the University of Virginia, revealed that while the recession has brought "considerable stress" to many American couples, it has also created stronger bonds in some relationships and delayed divorce among some unhappy couples who cannot financially afford to separate.

The survey's data is based on a nationally representative sample of 1,197 married Americans ranging from ages 18 to 45. The findings, based on information collected in December and January, offer a glimpse on how the stagnant economy has affected married couples in the US.

Overall, 82 percent of respondents said they were "very happy" or "happy" in their marriages. However, financial stress strongly predicted lower marital happiness. For men and women without financial stress, 87 percent reported being happy or very happy in marriage. By contrast, the number fell to 84 percent among those who said they had one economic worry. For those who had two or three financial concerns, only 67 percent reported being happy in marriage.

In addition, the researchers found that the economic slowdown artificially lowered divorce rates as unhappy couples tended to stay together mainly for financial reasons. In the study, about 5 percent said they were thinking about separation or divorce, but nearly 40 percent of those people said the recession had led them to delay plans to split up.

"Some people are putting off divorce until they have the financial means to go ahead with it," said Bradford Wilcox, associate professor of sociology and director of the project. "But for some couples, our data indicate that they have deepened their commitment to marriage. I think that deepened commitment will be there even after the economy improves."

According to The Washington Post, the authors of the study also found that Americans without college degrees were affected more by the recession--including their marriages--than their college educated counterparts. A greater percentage of respondents without a college degree faced at least one type of economic hardship, compared with those with college degrees. Moreover, a higher proportion of the same group said they were at a high risk of divorce, compared to college educated married couples.

Notably, one factor that resulted in a deeper commitment to marriage was religious participation, a press release reported. Couples who attended church together reported higher marital quality and less financial stress in the face of the recession.

"For Some, a Recession-Proof Marriage," well.blogs.nytimes.com, February 7, 2011, Tara Parker-Pope