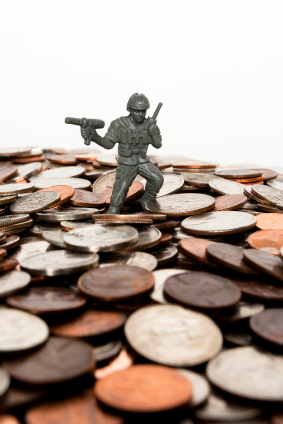 Last fall, the U.S. Department of Veterans Affairs granted $3,000 in emergency aid to tens of thousands of veterans waiting for education benefits under the Post 9/11 GI Bill. Now, says the department, it's payback time.

Air Force Times reports that about 122,000 people have received letters from VA saying they must begin repaying the advanced payments. Those who are receiving spring term GI Bill benefits will have the option to have $750 a month deducted from monthly living stipends beginning April 1, allowing the $3,000 to be repaid in four months. Those who are not receiving living stipends this spring will need to make other arrangements. VA officials have promised flexible repayment terms as long as the $3,000 is recouped within 12 months.

The advance payments were made available to student veterans in October after a flood of applications caused a major backlog at VA, causing some students to take out loans, use credit cards and even consider dropping out of school in order to make ends meet. But repaying that $3,000 may be difficult for some.

"We are advising our members to look at their personal finances and ensure that they can afford that amount," said Brian Hawthorne, legislative director for Student Veterans of America, who was quoted by Army Times. "We are suggesting that if this amount will negatively impact their bottom line or their family situation, they should call right away. It has been made very clear to us by VA that if it is too aggressive, they are willing to work with the student veterans that need to adjust the pace."

Earlier this week, Rep. Glenn Nye, D-Va., said that the department was not giving student veterans enough time to repay the money. He suggested that VA cap repayments at 20 percent of the living stipend, which could be as low as $132 a month in low-cost areas.

"Asking our veterans to repay $750 a month is too much, too fast, especially when many veterans are struggling to get back on their feet after their benefit payments were delayed last fall," Nye said in a statement which was quoted in Marine Corps Times. "The idea of this program is to help our veterans get ahead, not to bury them in debt and paperwork. VA should implement a realistic repayment plan that eases the burden on our veterans so they can focus on getting a college education."