Video Interviews Are On The Rise 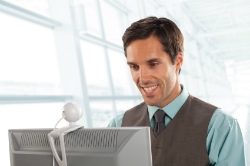 To help reduce time and expenses, companies are increasing the number of job interviews conducted by video.

The Wall Street Journal reported that according to the market research firm The Aberdeen Group, 10 percent of companies used video as part of the hiring process in 2010. However, that number jumped to 42 percent for senior executives, management and entry level job functions.

In a nod to the trend, an article from The Chronicle of Higher Education noted that 12 to 18 percent of job interviews for the Modern Language Association of American are conducted through Skype. Mark Bousquet, who wrote on The Chronicle's Brainstorm blog, estimated that Web-based interviewing saves departments as much as $5,000 to $10,000 per search.

Yet even though video interviews save time and money for companies, job candidates can experience some awkward moments as a result. For example, Stephen M. Winzenburg, a professor of communication at Grand View University in Des Moines, Iowa, related to The Chronicle how his job interview went awry when his dog unexpectedly started barking wildly in the background.

"So with gritted teeth," Winzenburg wrote, "I pretended that it was totally normal to have a dog barking in the background of a professional interview."

To avoid mishaps such as these, consultant Kerrie Hopkins told CBS MoneyWatch that it's best for job candidates to practice and even record themselves to prepare for a video interview. "People have no idea how they are being received on another's computer screen," she said.

Some other suggestions offered by CBS MoneyWatch included looking into the camera, getting rid of distractions, and keeping one's hands in view of the interviewer. Also, said experts, dressing appropriately can go a long way.

"It may seem like a good idea to wear a dressy top, and shorts below where you think the camera might not see it," said Dawn Rasmussen, president of Pathfinder Writing and Career Services in Portland, Oregon, who was quoted by CBS MoneyWatch.com. "But you might be surprised how wardrobe malfunctions can happen. Dress the part 100 percent . . . just like you are going into a real interview, which this is!"

The Wall Street Journal noted that despite the uneasiness that can come with a video interview, some job candidates prefer it. In particular, the one-way interview, which requires that people respond to pre-set questions without a live person on the other side, has its advantages.

Robbie Davis, 23, told the Journal that being able to do a one-way video interview at home at any time during a two-week period removed a certain amount of stress. "Sometimes you're trying to make it to an interview on time," he explained, "and you get stuck in traffic."