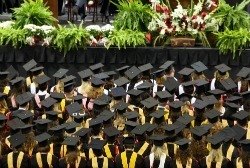 Wake Forest University's commencement ceremony attracted a lot of reporters (and subsequent press) on Monday, but not necessarily for the reasons one might expect. Yes, the ceremony celebrated the accomplishments of the young graduates, but it also marked the first public appearance for commencement speaker Jill Abramson since what USA Today called her "unceremonious ouster" as executive editor for The New York Times last week. Abramson did not shy away from her recent experience when delivering her speech and stayed squarely on the high road.

Nobody knew what to expect when Abramson took the stage. According to USA Today, Times Publisher Arthur Sulzberger, Jr. was very defensive when discussing the firing over the weekend, releasing a statement that was "harshly critical" of the woman he hired to run his newsroom less than three years ago. In her speech, however, Abramson chose to address the experience in a positive light, though she acknowledged her pain.

"Losing a job you love hurts," said Abramson, as reported by USA Today. She described the paper as an "important and irreplaceable institution" and even vowed not to have The New York Times "T" tattooed on her back removed. "Not a chance," she said.

Abramson also offered more general advice about life and career, reported The Washington Post. She emphasized the importance of showing up (even when it is not easy), maintaining your sense of humor and continuing to work, always. In her closing, she invoked poet Robert Frost's 1956 Colby commencement speech in which he encouraged graduates to mind their knitting.

"My mother was a great knitter, and she made some really magnificent things, but she also made a few itchy, frankly hideous sweaters for me," said Abramson. She said that sometimes we succeed; other times we fail. What is important, she noted, is that we continue to have something to do and goals to achieve.

Abramson's address gained a lot of traction on Twitter, reported Mashable, where friends, colleagues and admirers supported her and her work.

"We all know this funny, smart, knowing Jill," tweeted journalist and Times colleague Lydia Polgreen. "I miss her. It is terrible that it ended this way."

Abramson's speech was arranged with the help of Bloomberg View columnist Al Hunt, a trustee and alumnus for Wake Forest and a friend and former colleague of Abramson. In his introduction, reported The Washington Post, Hunt called Abramson "tough, no-nonsense, even pushy in her passionate commitment" to her work.