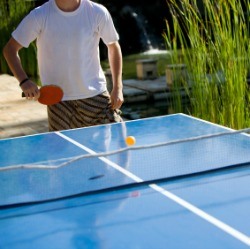 Officials at Wake Forest University have taken steps to help students slow down, relax, and connect with each other, even if only for short time periods between classes. The North Carolina school has enhanced its on-campus outdoor spaces with the hope that students will use them to incorporate some fun into their busy days, the Winston-Salem Journal reported.

"Today's college students are well-known for being the most overscheduled and routinized young people in history," Provost Rogan Kersh told Wake Forest University's News Center. "Encouraging them to embrace well-being in mind, spirit and body can help them balance the demands of Wake Forest's academics and their extracurriculars."

"This is the first generation of young people who actually schedule time in their calendars to talk to their friends," Kersh added in the Winston-Salem Journal. "We wanted to find ways to interrupt these routines, and to add a touch of spontaneity and play to the mix."

According to university's News Center, the school contracted with the park and public spaces firm Biederman Redevelopment Ventures Corp., which set out to transform the open spaces on the campus. Initially, last fall, lightweight, movable tables and chairs were added along with ping-pong tables and custom carts chock full of board games and fitness equipment. The school intentionally did not announce the changes, as the goal was an organic evolution of the environment.

This semester, the school installed more features, including furniture, outdoor classrooms, an al fresco café and even a custom piano, in various spots like Hearn Plaza, near ZSR Library, Reynolda Patio and Mag Quad. Plans call for the development of even more places to unwind and socialize at sites like Reynolda Village.

Jessica Blackburn, a WFU senior studying biology, described some of the benefits of these campus additions in Inside Higher Ed: "All of these spaces are a reminder just to hang out with people and relax, and focus on community and take a little break from your work, which is really important if you don't want to burn out."

To enhance what already has been done, WFU intends to also institute regularly scheduled activities, such as fitness classes and musical performances. BRV has been collaborating with campus clubs, professors and local businesses to research and arrange these events and activities.

WFU officials aim to expand the school's wellness initiative further, Inside Higher Ed noted. They are working with Gallup on a survey to learn what well-being on a college campus means. What they discover could serve as a benchmark against which WFU's future student-wellness offerings can be measured. The school also plans to hire a director of student well-being.

"It feels as if our responsibility to these students does not stop at the classroom door, and so this notion of educating the whole person feels pretty necessary," Kersh said.