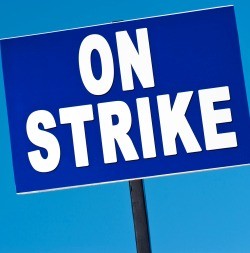 The National Labor Relations Board (NLRB) investigated charges against Walmart for taking action against employees who went on strike on last year's Black Friday. Some charges stuck while others didn't, but in the end, the NLRB found Walmart guilty of violating employee rights when workers protested last year.

As noted in a press release on the matter, Walmart violated the National Labor Relations Act in several ways. During national TV news broadcasts as well as in statements to Texas and California employees, the corporation illegally threatened employees with reprisal if they decided to strike on November 22, 2012. When many of these employees decided to participate in these legally sanctioned strikes and protests, stores in California, Texas, Florida, Minnesota, Illinois, Colorado, Kentucky, Washington, Ohio, Louisiana, North Carolina, Minnesota, Maryland, and Massachusetts responded with unlawful threats, surveillance, discipline, and/or terminations. Meanwhile, stores in Florida, Texas, Missouri, and California engaged in similar unlawful discipline against their workers "in anticipation of or in response to employees' other protected concerted activities."

Walmart was also acquitted on a few charges. According to the NLRB, stores in Washington and California did not illegally alter employee work schedules, and stores in Illinois and Texas were not acting against the law when they asked large groups of non-employee protestors to move off of Walmart property.

CNN Money reported that Walmart has up to two weeks to reach a settlement with the affected workers. The settlement must involve either giving those workers their jobs back or compensating them with back pay. If the corporation and employees cannot settle on their own, the agency warned that it would file a complaint against Walmart and plan for a trial. NLRB numbers showed that 117 employees were fired or otherwise disciplined for participating in the protests and strikes.

Dan Sclademan, director of Making Change at Walmart (an organization associated with the United Food and Commercial Workers union), told The Plain Dealer that he agreed with and was not surprised by the board's decision. He further commented that the situation "...is going to be a reminder to these workers that it is time for us to stand up to corporations like Walmart and tell them that stepping on workers' rights is unacceptable."

Walmart, however, has a different view of the ordeal and of the NLRB's decision. The corporation emailed a statement to The Plain Dealer, saying, "We disagree with this position by the (NLRB's) Division of Advice. This is just a procedural step, and we will pursue our options to defend the company because we believe our actions were legal and justified." The statement went on to say that Walmart "provide[s] good jobs and unparalleled opportunities for [its] associates."

The corporation drew on past experiences to help validate its opposition to the NLRB's ruling: "...[T]here has not been one decision in the last five years by the NLRB or by a court finding that Walmart violated the National Labor Relations Act. That is because we take our obligations under the Act very seriously and we train our managers accordingly."

Labor and activist groups who were present at the news conference would not say how the decision would impact this year's Black Friday, which is right around the corner. OUR Walmart, a group comprised of current and former workers, as well as supporters, plans to provide details closer to the 29th.