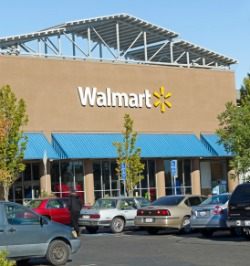 Food drives at U.S. businesses during the holiday season are so common one might not think twice about seeing a collection bin set up in a local store. There is one food drive generating a lot of headlines this week, however, and it has prompted a national debate of sorts about fair wages. The location: A Cleveland-area Walmart. Its intended beneficiaries: Its own employees.

Workers at a Canton, Ohio Walmart noticed food collection bins set up in an employee-only area this week, reports The Plain Dealer. The affixed sign reads: "Please Donate Food Items Here, so Associates in Need Can Enjoy Thanksgiving Dinner." An anonymous employee snapped a photo of the bins, and the image has spread quickly across blogs and media outlets. Some publications, including Slate Magazine, suggest that the drive is a clear sign that "wages are too low." It is a sentiment that The Plain Dealer notes has drawn a number of Walmart employee protests over the last year.

Norma Mills, a Canton resident who lives near the store, told The Plain Dealer that the photo of collection bins prompted feelings of "outrage." Mills is an organizer for a group called Stand Up for Ohio, which is active in foreclosure issues in Canton.

Kory Lundberg, a Walmart spokesperson, said the food drive is just a sign that employees care for one another, and is intended to support workers who have faced recent hardships, like the loss of a spouse's job -- not to supplement low wages. He said the decision to hold the drive was made at the store level, but The Plain Dealer notes it reflects a company-wide culture. The Associates in Critical Need, for instance, is a program that allows employees to donate part of their checks to a national fund meant to support other workers in times of need. Since 2001, the program has provided more than $80 million in grants.

The employee who took the photo -- who withheld her name for fear of being fired -- told The Plain Dealer that she found the drive "demoralizing" and "depressing." She sent the photo to the Organization United for Respect at Walmart, or OUR Walmart, which is a group of associates planning the strikes in Cincinnati and Dayton on Monday. OUR Walmart organizer Vanessa Ferreira said she "flipped out" when she saw the photo.

"Why would a company do that?" said Fierra. "The company needs to stand up and give them their 40 hours and a living wage, so they don't have to worry about whether they can afford Thanksgiving."

Kate Bronfenbrenner, director of labor education research at Cornell University's labor school suggested that the fact that Walmart officials see the bins as a symbol of generosity is problematic.

"That captures Walmart right there,"Bronfenbrenner told The Plain Dealer. "Walmart is setting up bins because its employees don't make enough to feed themselves and their families."

Walmart is also making headlines for another, related reason. According to The Huffington Post, the National Labor Relations Board announced Monday that it would pursue charges against the retail giant for threatening and punishing workers who planned to go on strike last year. Joseph Hansen, president of United Food and Commercial Workers, said that the charges show that "workers who've joined together to improve conditions have been targeted."

"Walmart is on their heels," Hansen told The Huffington Post. "Does Walmart treat its workers fairly? It is a debate that we welcome, and one that we plan on winning."

"Here's How You Know Wages Are Too Low," slate.com, November 18, 2013, Matthew Yglesias, http://www.slate.com/blogs/moneybox/2013/11/18/walmart_food_drive_retail_giant_is_raising_money_for_its_own_employees.html