Want To Get Hired? Must Have A Sense Of Humor 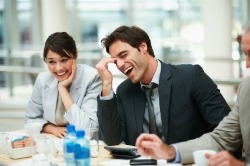 Humor does appear to have a place in the work space, at least according to a recent study released by Accountemps.

As reported in a press release, an independent research firm interviewed a random sample of more than 1,400 chief financial officers to see how important a sense of humor was for fitting into a company's workplace culture. The bulk of the responses--57 percent--fell into the 'somewhat important' category. The next most popular response was 'very important' at 22 percent. The interviewed CFOs were from U.S. companies that had at least 20 employees.

"Sometimes, a little levity goes a long way toward building rapport among colleagues and diffusing workplace tension," said Max Messmer, chairman of Accountemps, in the press release. "All work and no play can erode employee morale."

According to AOL Jobs, the benefit of humor in the workplace has been noted before, specifically by Chris Robert, an assistant professor of management at the University of Missouri. He and a doctoral student researching the benefits of humor discovered it can increase creativity, cohesiveness and productivity on the job.

"The use of humor, and the ability to produce and make humor, is associated with intelligence and creativity, two things highly valued in workplaces," said Robert a in 2007 Businessweek article that AOL Jobs quoted.

Futhermore, laughing can cause a spike in healthy hormones while also allowing a drop in levels of cortisol, a stress steroid. In other words, noted AOL Jobs, humor can also help you stay fit.

While it is recommended that all humor in the office be appropriate, Messmer also has suggestions for managers as far as making humor a part of their interactions with employees, according to the Deseret News. For example, managers should engage in casual conversation with employees, laugh at jokes together and share funny stories.

"Managers with a good sense of humor will be viewed as more approachable by their employees," Messmer told the Deseret News. "Levity by those at the top can make the office less stressful and even more fun, which can help improve productivity, morale, and retention."

Additionally, he advised that when it comes to job interviews, candidates should allow their true selves to come through.

"The interview is no place for a stand up comedy routine, but it is the right time to show hiring managers you are approachable and will be easy to work with," Messmer explained in the press release.

Career and Education News
Home >
News>
Want To Get Hired? Must Have A Sense Of Humor