Want To Stand Out To Employers? Get A Master'S Degree 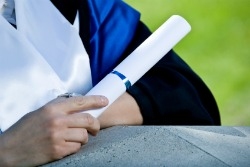 Is a master's degree the new bachelor's degree? According to The New York Times, the answer might be yes.

Once enough to land a college graduate a job, the bachelor's degree has quickly taken a backseat to the master's degree in recent years. As The New York Times pointed out, a quick look at job listings will show that while a bachelor's degree is required, most employers prefer applicants with a master's. In fact, according to Debra W. Stewart, president of the Council of Graduate Schools, the master's is now the fastest-growing degree. The number of master's degrees awarded has more than doubled since the 1980s and with more people going back to school, its rate of increase has quickened significantly in the last few years. Today, nearly 2 in 25 people age 25 and over have a master's.

"Several years ago it became very clear to us that master's education was moving very rapidly to become the entry degree in many professions," Dr. Stewart said.

Indeed, U.S. News University Connection reported that according to a Georgetown University study, in 1973, just seven percent of jobs required applicants to have at least a master's degree. By 2018, however, that figure is expected to jump to approximately 10 percent.

Dr. Stewart told The New York Times that the popularity of a master's degree has grown rapidly because master's degrees are specific and utilitarian. Institutions now offer very specialized degrees, such as the M.S. in supply chain management or M.S. in skeletal and dental bioarchaeaology. Humanities departments are also recognizing the need to be more focused and are coming up with programs that help students boost their resumes.

"There are several million job vacancies in the country right now, but they don't line up with skills," said David King, dean of graduate studies and research at the State University of New York at Oswego and director of the Professional Science Master's Program, which oversees a new type of degree across the SUNY system--the P.S.M., or professional science master's. This "degree of the moment", as The New York Times calls it, combines job-specific training with business skills.

So, why the growing demand for a master's? Have jobs become so advanced that applicants really need to be more educated? Or do applicants simply want more money? As U.S. News University Connection reported, Bureau of Labor Statistics data show that, on average, a master's degree holder earns about $12,000 more a year than someone with just a bachelor's. Or does a master's degree lead to more career options? According to Yahoo! news blog The Lookout, the unemployment rate in June was lower for Americans with a bachelor's degree or higher than for the general population of workers 25 and older--4.4 percent versus 8.2 percent.

Laura Georgianna, head of employee development at Welch Allyn, told The New York Times that the credential can be used to weed out applicants, saying that while a master's cannot guarantee that an applicant will be more successful, it does say that the person "is committed and dedicated to the work and has committed to the deep dive. It gives you further assurance that this is something they have thought about and want."

Career and Education News
Home >
News>
Want To Stand Out To Employers? Get A Master'S Degree