Washington DC Tries To Get Employees To Live Near Work 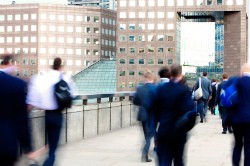 Washington D.C.'s Office of Planning (OP) will partner with select employers to provide monetary incentives for workers who move closer to the office or public transportation. The pilot program, appropriately called Live Near Your Work, has a total of $200,000 to give to participants. In addition to the money, the benefits are obvious--employees would spend less money and time commuting, employers would reduce parking costs and see better on-time and work performance and the region would experience less traffic congestion and air pollution.

OP will match employer contributions up to $6,000 for 60 participants. According to WTTG-Fox 5, the money would be given to employees as a grant or a zero percent interest loan to be paid back once the property is sold. A minimum of $6,000 would go to workers who opt to buy homes in the District within a half mile of a Metro station or within a quarter mile of a "high-quality" bus corridor. The maximum amount--$12,000 total--would go to those who buy a house that is within two miles of their work and commit to that home for five years.

An OP press release announced that the organization would be accepting applications from interested employers through June 17, 2011. To start, just three employers will be chosen. In order to be selected, employers must demonstrate "ability to administer the pilot program, offer homebuyer education, and provide matching grants for their employees".

Deputy director of the DC Office of Planning Rosalynn Hughey told WTTG-Fox 5 that she is hoping big employers will be interested in partnering.

Though the program has not launched yet, it has already received some criticism. Fast Company pointed out that with just 60 employees, the program is not large enough to have a significant impact on the D.C. area. Furthermore, the Washington City Paper noted that spending more money on improving and expanding public transit or creating affordable housing in the area would be better incentives.

OP responded, saying that the purpose of the pilot program is to analyze who would benefit and how. The organization will also look at how the program affected commute and transportation costs. Should data show that the program had measurable benefits, it will be continued and expanded in the future.

"OP Releases Request for Applications for a Live Near Your Work Pilot Program," planning.dc.gov, April 29, 2011