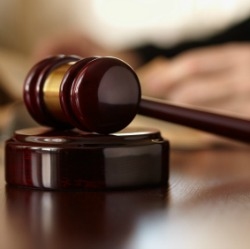 Weight discrimination in the workplace remains legal in 49 states and its support continues, but this time from the judicial branch of government in New Jersey. Twenty-two cocktail waitresses at Atlantic City's Borgata Hotel Casino & Spa last week lost a weight discrimination and sexual harassment case they'd filed against their employer, reported the Press of Atlantic City.

"Weight is the last bastion of discrimination in the workplace that's still acceptable," James J. Parks, a partner at Jaffe Law Firm specializing in harassment and employment issues, told TIME. "Whether an employer's policy is nice or nasty doesn't mean anything. Whether it's illegal is another issue, and unfair doesn't always equal illegal."

Borgata policy prohibits its female and male cocktail servers, known as the "Borgata Babes," from putting on more than 7 percent of their body weight after getting hired, according to the Press of Atlantic City, so a 130-pound woman couldn't add more than 9.1 pounds. Exceeding the weight limits is grounds for suspension. The servers, who undergo mandatory, periodic weighing, at times were directed to ingest laxatives beforehand or quit taking weight gain-causing prescription medications.

Johnson stated the women knew when they were hired what was expected of them. During auditions for the job openings, the employer gave the 4,000 applicants a document that described the Borgata Babes as "part fashion model, part beverage server, part charming host and hostess. All impossibly lovely." Furthermore, all of the women hired as Borgata Babes signed the weight policy.

"For the individual labeled a babe to become a sex object requires that person's participation and nothing before the court supports a finding of fraud, duress or coercion in connection with the plaintiffs' hiring," Johnson wrote in his ruling, TIME indicated. "Plaintiffs cannot shed the label babe; they embraced it when they went to work for the Borgata."

The hotel-casino company's executives were pleased with the lawsuit's outcome, the Los Angeles Times noted.

"We have long held that Borgata's personal appearance policy is lawful and reasonable," said Joe Lupo, vice president of operations for the casino.

However, Richard Bernstein, a disability rights attorney based in Michigan, says the ruling in the Borgata could set an unfavorable precedent.

"That's a horrible ruling," he told TIME. "You have to look at the far-reaching applications of it. You always have to look at a decision with a broad brush. That decision gives employers a tremendous power over people in the workplace."