What Colors You Wear Impact Your Interview 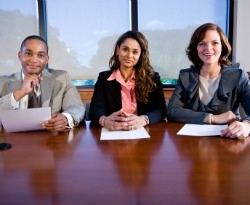 The savvy job seeker knows that when it comes to the big interview, it pays to dress smartly, but according to United Press International, new research suggests what color you wear matters, too. In fact, employers may attribute a number of attributes to you based entirely on what color you happen to sport that day, and certain colors are more favorable than others. (Hint: If you want to land that position, ditch the orange.)

The survey was conducted by the jobs site CareerBuilder, which aimed to find out how job interviewers interpret different clothing colors in job candidates, and whether certain hues can help or hurt interviewees in the long run. The survey was conducted by Harris Interactive online between August 13 and September 6. Respondents included 2,099 hiring managers and human resource professionals from across several industries and company sizes.

When asked to choose the best color for an interview, most participants suggested blue (23 percent) and black (25 percent). According to Business Insider, this adds credence to previous research that suggested candidates are most likely to land a job when they wear navy blue to an interview -- more so than any other color. Hiring managers' least favorite interview color: Orange. The CareerBuilder release noted that a full 25 percent of employers said orange was the color they most often associated with unprofessionalism.

The survey also examined what attributes interviewers are likely to link to certain clothing colors. Black, for instance, often signifies leadership, blue suggests one is a team player and gray points to strong analytical skills. Wearing white suggests you are organized and brown dependable. Red is linked to power. Four colors -- green, yellow, purple and the unpopular orange -- are all associated with creativity.

The CareerBuilder release notes that while job interviewees' wardrobe colors matter, career experts suggest there are other dress rules that should be followed, too. They advise candidates to dress for the environment, but to always look polished and never too casual. They recommend sticking with neutrals and ensuring outfits are properly sized and tailored. Wacky ties and loud patterns are an unwanted distraction for interviewers, as are wrinkled items and unmanicured nails.