When Choosing A College, Academic Major Is Most Important 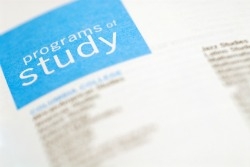 When it comes to choosing a college, educational quality and cost continue to influence students' decisions the most.

According to a press release, Maguire Associates, a research-based consulting firm exclusively for educational institutions, and scholarship-search website Fastweb surveyed more than 2,000 high school seniors to find out what were the most important factors in determining where students enrolled for college. The survey was a follow-up to the 2011 College Decision Impact Survey that was conducted in January.

Though the survey showed that 43 percent of college bound students said "scholarship and financial aid" was important and 41 percent said "total costs", 45 percent ranked "quality of major" as the highest reason they enrolled at their chosen college. Thirty eight percent ranked "academic reputation" as highest.

"Families are looking carefully at whether colleges and universities deliver the ROI they're promising to students," said Tara Scholder, Senior Vice President of Maguire Associates.

Scholder told The Chronicle of Higher Education that the current economic climate made it difficult to predict this year's results; however, findings ended up being consistent with results over the last several years.

According to a survey conducted in March by Maguire Associates and Fastweb, the top five factors that students considered the most when choosing prospective colleges were quality of major, value of education (quality and cost), employment opportunities after graduation, availability of financial aid and total costs.

In addition to gaining insight into what factors students considered when selecting a school, The Chronicle of Higher Education noted that almost 63 percent of college bound graduating seniors decided to attend their first choice. Of those who plan to go somewhere else, 35 percent said they were not admitted to their first choice, while 31 percent said their first choice was too expensive. Indeed, the press release pointed out that while eight out of 10 students applied for need-based financial aid, just 56 percent received assistance from their enrollment schools.

While much of the results were not surprising, Scholder told The Chronicle of Higher Education that there was one new trend--more students reported that they were placed on one or more wait lists. Twenty eight percent of students said they were waitlisted this year versus 20 percent in 2009. According to the press release, social media also played a role in the decision making process. Fifty four percent of respondents said they read information on a social media site about their enrollment school and about one-third used an online net price calculator (NPC) to estimate the cost of attending the school they chose.

Career and Education News
Home >
News>
When Choosing A College, Academic Major Is Most Important