When It Comes To Tuition, UC Berkeley Joins The Ranks Of Elite Private Schools 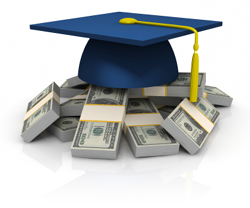 For many, attending the University of California Berkeley would be a dream come true. Unfortunately, that dream may now be unattainable for many families and students. According to The Chronicle of Higher Education, UC Berkeley has become the first public institution to charge $50,000 for tuition, fees, room and board--a sticker price usually reserved for elite private institutions.

By now, we are all familiar with rising tuition costs, particularly in cash-strapped states such as California. As California struggled with the lack of state funding, many institutions were forced to not only cut faculty and classes, but also up the price of tuition to make ends meet, which has outraged students. According to The Daily Californian, roughly 700 fed up students participated in a Day of Action rally on the Berkeley campus last month to protest the escalating cost of higher education. Students picketed, marched and eventually congregated in a reading room in Doe Library to hold a sit-in until Chancellor Birgeneau responded to their list of demands.

According to NPR the $50,000 price tag applies to out-of-state students. (The Chronicle of Higher Education noted that in-state residents are only charged $27,770.) The cost, which is a 6.1 percent increase from last year, covers a base tuition of $35,000; $15,000 for on-campus housing; an estimated $1,300 for supplies, books and "personal expenses"; and $618 for transportation costs.

Of the 600 or so four-year public institutions that provided information on tuition costs, 14--besides UC Berkeley--reported charging $40,000 or more in 2010-11, eight of which were University of California campuses.

Fortunately, for some students, recent increases in financial aid has helped families combat the rising costs of higher education. Although net prices for the 2010-11 academic school year are not available, the College Board estimated that the average net cost for tuition, fees, room and board at private four-year colleges is $21,020, when adjusted for inflation. This is a slight decrease from five years ago, thanks to an increase in federal grant aid.

Still, some students have to pay the full price as they may not qualify for federal aid, which makes attending expensive schools unrealistic. As The Chronicle of Higher Education pointed out, $50,000 is double the yearly income for a family of four living at the poverty line, $22,050.

Career and Education News
Home >
News>
When It Comes To Tuition, UC Berkeley Joins The Ranks Of Elite Private Schools