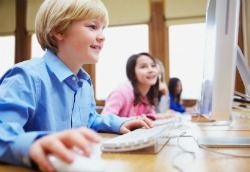 The White House is upping its emphasis on technology use in the classroom with the recent announcement of a technology-driven initiative called "Digital Promise."

The plan, announced Friday, calls for the formation of an actual center to be created through Congressional bipartisan support and to focus on advancing technologies for learning and teaching in the classroom, according to a White House press release. Digital Promises' hub, to be called the National Center for Research in Advanced Information and Digital Technologies, will be co-chaired by former Federal Communications Commission chairman Newton Minow and former NBC News president Lawrence Grossman, the USA Today reports.

"It's hard to believe what's happened in 10 years, technologically," Minow said in the USA Today. "It was a different world."

As part of Digital Promise, administrators, entrepreneurs, researchers and teachers will work together to identify and create new technologies that could have widespread application in schools, according to the White House. The initiative is actually part of President Obama's call to create new jobs through innovation and education and to improve the U.S. school system in the 21st century, the White House reports.

According to the White House, key components of the initiative include ascertaining what is currently working and what is not, identifying new technologies and transforming the market for learning technologies.

"Created by Republicans and Democrats and championed by a coalition of educators and business leaders, Digital Promise is an independent nonprofit that will help spur breakthrough learning technologies," said U.S. Secretary of Education Arne Duncan. "And it will help make sure Americans of all ages and races, regions and backgrounds can benefit from them. By harnessing the extraordinary work being done by educators, innovators, and citizens across this country, Digital Promise can help prepare Americans - and America - to succeed in the 21st Century."

The project was actually authorized in 2008 by law, and should be receiving money from the U.S. Department of Education as well as a variety of philanthropies, reported The Hill.

Additionally, TechAmerican Foundation, the nonprofit arm of an industry lobbying firm, is to take steps forward and outline top policy objectives for the first year. Groups such as the Information Technology Industry Council and the Software and Information Industry Association are expected to provide input.

One of the first projects will be to research the potential of so-called "digital" tutors to help students improve in subjects such as math, according to The Hill. Another idea is the creation of a "League of Innovative" schools that would try out new technologies and ascertain the ways to keep costs down, reported USA Today.

"Given the power of this technology, the administration believes that we should be doing everything we can to take advantage of it," USA today reported Tom Kalil of the White House Office of Science and Technology Policy as saying.