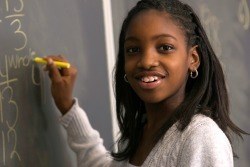 According to the Obama administration, schools with high levels of poverty and a large population of minority students are increasingly getting a raw deal when it comes to education. Focusing specifically on the quality of teachers in these areas, the Obama administration recently announced a plan aimed at improving educational outcomes for students. Some states are already taking initiative to accomplish this same goal.

As The Wall Street Journal pointed out, the President's effort is part of a broader agenda to improve educational quality in poor areas while other reforms are still being considered by Congress. "One ingredient that we know makes an enormous difference is a great teacher," said President Barack Obama at a luncheon with four teachers. "Unfortunately there are a lot of kids around the country who are not getting the kind of teaching that they need."

As Education Week recently pointed out, the new plan would build upon regulations included in the 12-year-old No Child Left Behind Act and would require each state to submit plans for teacher distribution by April of 2015. The hope is that, by having each state reevaluate the way their teachers are distributed among low-income and moderate-income school districts, areas for improvement could emerge.

According to Education Week, a national survey showed that teachers who taught core classes in low-income areas were far more likely to be out-of field. In addition, President Obama has also voiced concern that the least-experienced teachers end up in the poorest schools, a result that leaves low-income students in an inferior learning environment.

Secretary of Education Arne Duncan supports the measure as a step in the right direction toward equal educational opportunities for all students.

"When a school or a school district or a set of schools in a disadvantaged community has disproportionate numbers of inexperienced teachers, that's not a good thing," Education Secretary Arne Duncan told reporters on Monday, as reported by The Washington Post. "As a nation, we've had far too few incentives, and, frankly, lots of disincentives for the hardest-working and the most-committed teachers and principals to go to the communities who need the most help, and we have to get together and reverse that."

The Department of Education has currently set aside $4.2 million specifically for the creation of a technical assistance network, which will likely be called the "Educator Equity Support Network," Education Week noted. The network will provide a platform for teachers and schools to share information about how they're solving teacher-equity problems and offer models for states to refer to for help. The administration will also publish a profile for each state later this fall, with each state's profile offering information on the distribution of experienced teachers and where any gaps in educational quality may be.

As Education Week mentioned, some fear that states who fail to create an adequate plan to address issues of teacher equity risk not having their No Child Left Behind waiver renewed by the Obama administration.

"This could be a very adversarial process between states and the federal government," said Secretary Duncan. However, the administration only plans to focus on the goal at hand for now, which is to improve educational outcomes for low-income and minority students.

"This isn't about playing gotcha."