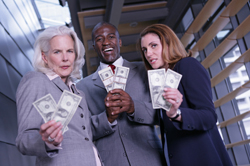 According to a recent report released by the White House, women have surpassed men in college attendance at all levels of education, but still only earn 75 percent of what men make.

The report, titled Women In America: Indicators of Social and Economic Well-Being, is said to be the most comprehensive report on women since President Kennedy and Eleanor Roosevelt released a similar report in 1963, noted Forbes.

While White House official stated that there is no significant new information in the report, it does compile and analyze data for several different topics, including women's role in families and income, education, employment, health and crime and violence, which senior advisor to President Obama Valerie Jarrett said would be used to guide policy decisions.

"I think it will inform a wide variety of different policy in programs that the federal government will either initiate or continue but it will be evidence-based," said Jarrett, as quoted by CNN, during a conference call with reporters. "(We'll) look at those programs and how they fit together to improve the quality of lives of women as a whole rather than looking at it in a silo."

Forbes highlighted some interesting findings from the report: women are more likely to live in poverty than men. In 2009, 28 percent of single working women with children had incomes below the poverty line. In 2007-2008 women made up 57 percent of total college enrollment and earned approximately 57 percent of all degrees; however, they earn less than half of all four year degrees in mathematical and physical sciences and just 20 percent of computer and engineering degrees. In 2009, close to one-fifth of all women were secretaries, registered nurses, elementary school teachers, cashiers and nursing aides.

Jarrett told reporters that these statistics show how women's lives affect society and highlight what still needs to be done.

"(We) realize that we have got to encourage women to go into higher paying fields or be educated in a way that's going to lead to higher paying jobs," said Jarrett in CNN. "You really have to look at the whole story of a woman's life and I think this report gives us comprehensive framework to do that."

"Gap remains between the sexes when it comes to income," CNN.com, March 1, 2011, Lesa Jansen