Will College Students Vote in the Presidential Election? 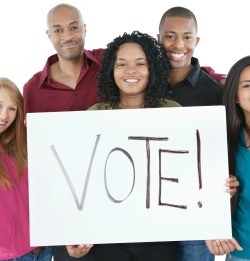 In November of 2008, Barack Obama was elected the 44th President of the United States, thanks to overwhelming support and voter turnout from college students and other young voters. With the next presidential election just around the corner, one question being asked is, will college students vote in such high volume that they did back in 2008? And will they support Obama in as high numbers as they did in the last election?

National Journal responds to the first of those questions with reports that only 58 percent of registered 18 to 29-year-olds surveyed in July 2012 said that they were "definitely" likely to vote, compared to 78 percent in October 2008. The Omaha World-Herald also reports that youth support for President Obama is waning. In 2008, 66 percent of voters between 18 and 29 years of age supported Obama, and the percentage of youth that voted increased. Since 2008, however, Obama's support in the same age range has dropped to 56 percent; Mitt Romney's support is at 37 percent, according to a CNN/Opinion Research poll.

Inside Higher Ed further explains that while support from those who were in college or just graduated during the last election is still strong, it's the current group of college students whom the Democrats need to win over. Obama has maintained strong approval ratings among 25 to 29-year-old voters. However, according to John Della Volpe, director of polling at the Institute of Politics at Harvard University, 42 percent of 18 and 19-year-olds today identify themselves as conservative.

The reason for this difference in political views? Inside Higher Ed points out that the political outlook of the two different age groups were shaped by very different environments. As Della Volpe notes, the older group's views were likely influenced by events such as the September 11 terrorist attacks, Hurricane Katrina, and the War in Iraq, while the younger age group was severely affected by the recession and economic crisis. As Aaron Smith, co-founder and executive director of the youth advocacy group Young Invincibles notes in Inside Higher Ed, the cost of attending college is "a defining issue for this generation."

The Omaha World-Herald adds insight to the effect of the economic downturn on recent graduates, many of whom are unemployed or underemployed and deep in student loan debt. According to a recent report by the Federal Reserve Bank of New York, the delinquency rate for student loans rose to 8.9 percent, the highest it has been in over a decade. The unemployment rate for individuals aged 18 to 24 is currently around 17 percent, compared to national unemployment rate of about 8 percent.

Despite this data, many individuals reject the notion that voter enthusiasm has declined. Smith reports in Inside Higher Ed that 15 million young voters have registered since 2008. Kal Penn, actor and former White House staffer for President Obama, is quoted in National Journal as he reinforces the belief that there is no enthusiasm gap: "The crowds that we had in 2007 and 2008, both in the primary and the general election, are the exact same crowds I'm seeing now."

Since young voters were so critical to the election outcome in 2008, the Republican and Democratic parties are attempting to capture the youth vote, apparent in both parties' national conventions. As Inside Higher Ed notes, Republican vice presidential candidate Paul Ryan tried to appeal to recent college graduates by stating, "College graduates should not have to live out their 20s in their childhood bedrooms...and wondering when they can move out and get going with life." Former President Bill Clinton, who spoke at the Democratic National Convention, spoke about college affordability and emphasized that under an income-based repayment plan for student loans, "no one will have to drop out of college for fear they can't repay their debt."

As Smith notes in Inside Higher Ed, efforts to get the youth vote are just getting started. The economy and college access/affordability are important issues for these voters, and perhaps, it will be just the thing to bring them to the polls come Election Day in November.