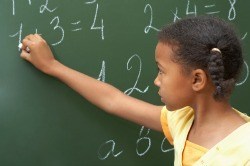 Performer will.i.am is perhaps best known for his work in the hip hop group The Black Eyed Peas, but his entrepreneurial and philanthropic spirit extends his influence into many spheres, such as politics and arts education. Now, he and Coca-Cola Chief Sustainability Officer Bea Perez have joined forces to raise awareness of a new issue facing American youth: the decline of science, technology, engineering and mathematics (STEM) training. According to an editorial the pair recently penned for The Washington Post, the price of not investing in STEM disciplines can have serious impact not just on employment, but the entire U.S. economy. They are not the only ones to suggest as much.

The editorial stated that technological innovation has accounted for nearly half of all U.S. economic growth for the last 50 years, but 2012 Program for International Student Assessment (PISA) scores revealed that American students rank behind many other developed nations when it comes to science and math literacy. This is a problem because a fair share of the country's fastest growing jobs are in STEM-related fields, they wrote, and employers are having trouble filling these technical positions. They suggested that bridging this skills gap could help address what they called a "ticking time bomb": youth unemployment. The youth jobless rate hovers around 16 percent, or about double that of the general population. This translates to about $25 billion annually in lost tax revenue and government benefits payouts, they wrote, and may trigger depression, low self-esteem and even lower life expectancy for those impacted directly.

Perez and will.i.am are not the only ones to highlight the potential costs of STEM illiteracy in American schools. In an editorial he wrote for The Huffington Post, Vince Bertram, President and CEO of Project Lead The Way, said that by not investing enough in these disciplines, the nation is losing its economic edge, and not just in the technology sector. STEM training fosters creativity and problem solving, skills that benefit workers in a variety of industries. Children are born with a natural curiosity that must be cultivated, he said. When schools prioritize tests and compliance over creativity and innovation, they do so at their own peril.

How can schools begin to close the STEM gap? Bertram, Perez and will.i.am all suggested that public and private sector organizations can do more to expose and attract students to these fields. Will.i.am pointed to his i.am.angel Foundation, a STEM-focused after-school tutoring program that brought students' grades from "dismal" to 3.5 and 4.0 grade point averages. He said that students involved in the program do not just want to come to school, "they are thriving."

Another way to get students passionate about STEM is to show them how these skills can be used to improve their communities in a very tangible way. According to Bertram, hands-on, project-based training can underscore both the relevancy and world-changing potential of STEM. He said that once students grasp core concepts, they can put their newly cultivated creativity and curiosity to work solving real-world problems.

This is the approach the STEM Academy program takes. Daily Local News reported that the Academy actually tasks students with developing and implementing "life-changing" projects and encourages them to continue their work after completing the program.

Of course, the first step toward overcoming any problem is recognizing that it exists, which is precisely what columns such as the one penned by will.i.am and Perez aim to do. They called on readers to do their part, too.

"Together let's push to bring STEM to every U.S. school," they wrote. "Let's harness the curiosity and creativity of our youth, and let's STEM the tide of unemployment and open the floodgates of hope and opportunity."

"We Have to Get Serious About Creativity and Problem Solving," huffingtonpost.com, May 7, 2014, Vince Bertram, http://www.huffingtonpost.com/vince-bertram/we-have-to-get-serious-ab_b_5272884.html