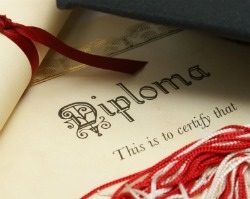 A bill is being considered in Wisconsin that would allow high school students to receive alternative high school diplomas by taking courses in vocational subjects such as nursing or automobile mechanics.

The bill is being sponsored by State Rep. Mark Radcliffe (D-Black River Falls), who explained that the measure is aimed at promoting job growth. "This bill meets a critical need in our state to help train a highly skilled workforce," he was quoted as saying by the Leader-Telegram. Radcliffe explained the advantages of the bill during a public hearing last week before the Assembly Education committee.

Currently, Wisconsin schools may only award diplomas to students who complete required courses in English, social studies, math, physical education and health. The new bill would allow diplomas to be granted to students who have not taken all the traditional courses but have earned credits in vocational subjects. School boards would determine how many credits would need to be earned to receive a diploma, and the state Department of Public Instruction would approve the schools' vocational programs.

Supporters of the bill say that vocational diplomas would boost employment prospects for students not planning to attend college. "You hear from businesses that they consistently have job openings but don't have people trained for the jobs," noted state Rep. Michelle Litjens (R-Oshkosh), who is co-sponsoring the bill and was quoted by The Northwestern. "We cannot continue to educate in this college-for-all mentality, because not every student is going to pursue a four-year degree. We need to make sure we're preparing our kids for a job tomorrow."

She also told WUWM that she expects that the business community would help fund the training programs. "I've talked to employers and there are employers in my area that are willing to make that investment for the school because they so desperately need to find people that are trained in that field," she said. "We'll bring some people from the business sector into the schools to do some of this training so it's not an additional burden on the school system."

But some education officials are concerned that allowing vocational diplomas would effectively lower the academic standards required for graduating high school. The Wisconsin Association of School Boards said in a statement that they are worried that colleges, employers or the military may not recognize such diplomas. Some are also concerned that vocational programs and diplomas would vary from district to district.

"Our biggest concern is that we really don't know what kind of value this kind of diploma is going to have to employers at large," said Joe Quick, a lobbyist for the school boards association, who was quoted by the Leader-Telegram.