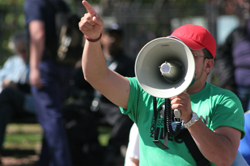 After weeks of deadlock, Wisconsin lawmakers successfully signed a bill that would eliminate collective bargaining rights for most of the state's public workers.

According to NPR, Gov. Scott Walker's proposal passed the Republican-controlled Assembly 53 to 42. Gov. Walker is expected to sign the bill as quickly as possible.

Tens of thousands of protestors gathered at the state's Capitol building in opposition of what Democrats called an attack on state employees, reported CNN. However, Gov. Walker and GOP lawmakers argued that the bill is an attempt to alleviate the state's $3.6 billion deficit.

"It's about giving local governments the tools they need to make reforms," said Walker to reporters. He defended the measure, saying it would help the state avoid property tax hikes as well as public employee layoffs. According to NPR, without the bill, Gov. Walker stated he would need to lay off 1,500 workers, in addition to other cuts.

The legislation is one of the biggest blows to the power of unions in years. Under the bill, government workers lose their right to collectively bargain for wage increases beyond the rate of inflation, unless approved by state voters. It would also require public employees to pay more towards their retirement plans and double their health care contributions. As a result, the average public worker would essentially be taking an 8 percent pay cut.

Elden Jelle, a 57-year-old custodial worker at the University of Wisconsin, told The Wall Street Journal he was worried.

Although outraged by the bills approval, Democrats and protestors were further infuriated by the way the vote was conducted. In an attempt to stymie the bill, 14 Democrats left the state, which prevented the chamber from having enough members to pass the legislation. However, after waiting weeks for them to return, Republicans took matters into their own hands by cutting down the bill so that it would no longer require a quorum of 20. Once Democrats got wind of what was happening, they rushed back, but were locked out of the chamber.

Shawn Johnson of Wisconsin Public Radio told NPR, "[Voters] knew there was going to be a vote on this at some point, but the way that it happened was definitely extraordinary."

Although a long-awaited victory for Republicans, Democrats are optimistic that this move will work in their favor at the ballot box.

"Already, there are recall petitions being circulated against eight of the Republicans who voted for this plan. I should also mention that there are recalls being organized against some of the Democratic senators who left town," said Johnson. "But Democrats think that overall, this is an issue that energizes their base certainly more than it was energized in last year's election."