Women Entrepreneurs Optimistic, and Gaining Both Private and Government Support 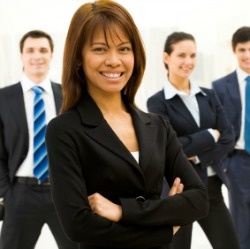 While companies and workers nationwide still harbor concerns about employment growth and the economy, recent studies and publications have indicated that one demographic shows particular optimism and promise: female small business owners.

A recent survey of 552 female small business owners by the National Association of Women Business Owners and Web.com revealed that 81 percent of survey participants felt optimistic about the performance of their businesses in 2013. In addition, 85 percent of participants expect to see more women entrepreneurs this year than last, reported Forbes last Tuesday. Their prediction is reasonable when one considers that, according to a recent Sage study, about half of all women ages 18 to 24 wish to start their own business ventures.

Women’s optimism and entrepreneurial ambition have come at a time when resources and funding are more readily available than ever. According to Forbes, investors and small business lenders have displayed increased interest in businesses that are owned and operated by women leaders. “The private sector has woken up to the potential market of women in a very big way,” stated NAWBO president Diane Tomb, “Women are starting and growing significant businesses, but the financial services on the horizon can help them to scale.” Examples of such services include big-name investors like Accel and Comcast, as well as smaller women-run funds such as Starvest Partners, Illuminate Ventures, and Women’s Venture Capital Fund.

Sources of support for female entrepreneurs are not just limited to private companies—the national government has also made steps to help women’s small businesses. According to Business 2 Community, the government developed the Women-Owned Small Business (WOSB) Set-Aside Program in 2011, and since then has lifted the $4 million and $6.5 million limits on federal contract set-asides. In addition, the U.S. Small Business Administration's website has a section for Women-Owned Businesses, which offers resources such as cost calculators, business plan guides, and federal loan information.

While they anticipate a bright outlook, the women business leaders who participated in NAWBO’s and Web.com’s survey had realistic expectations about the challenges they would face in the coming year and beyond. According to a Web.com press release, 39 percent of female entrepreneurs surveyed indicated that their main priority would be reaching new customers. 73 percent of participants said that they planned to invest considerably in updated marketing methods for 2013, including social media and search engine optimization.

Web.com’s Executive Vice President and Chief People Officer Roseann Duran commented on these results, stating, “Women Business Owners are laser focused on reaching new customers, and their strategy for doing so is focused on improving businesses’ online presence. […] This is great news for time-strapped consumers, as they can expect to have an improved and more socially engaged online experience with many of their favorite businesses in 2013.”