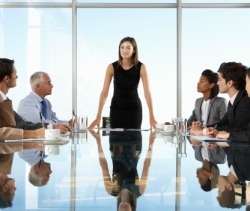 According to several female business leaders and a recent study conducted by Dow Jones VentureSource, women have found increasing success in entrepreneurial careers and business leadership, yet are still quite underrepresented in the fields of technology and computer science. Bloomberg Businessweek cites a panel discussion between Facebook’s Vice President Carolyn Everson, Stella & Dot founder and CEO Jessica Herrin, Surveymonkey.com’s Senior Vice President Selina Tobaccowala, and Theresa Gouw Ranzetta of Accel Partners to illustrate the headway women have made in the realms of business leadership and innovation.

In this panel discussion, Herrin commented that the openness she feels has developed in the venture capitalist environment. “I fundamentally believe that venture capitalists are interested in good business ideas,” she said to her peers as quoted by Bloomberg Businessweek. “They’ll take you, […] whatever color, whatever gender. They’ll take you if your idea is sound and solid.” Ranzetta agreed with Herrin’s view, adding, “For the first time, I actually see male co-founders and male co-founding teams who are explicitly looking to bring women into the executive team or the founding team.”

Herrin and Ranzetta are both referring to a recent phenomenon that a study released by Dow Jones VentureSource explores further. Entitled “Women at the Wheel,” this report pulled data from 20,194 American companies and 167,556 business executives from the years 1997 to 2011, and found that successful companies had a median proportion of women executives that was more than twice that of unsuccessful companies, according to The Wall Street Journal.

Some experts and company heads attribute this fact to the various advantages that women leaders bring to businesses, which include their different perspectives on potential consumers and their needs, their greater sense of caution about risky business decisions relative to their male counterparts, and their tendency to foster a more nurturing work environment for their team.

Nevertheless, women still face significant bias in the tech and start up industries. Forbes points out that, while the proportion of female executives at successful companies is significantly greater than at unsuccessful companies, the overall percentage of female leaders in business environments remains quite small among the companies surveyed in the Dow Jones study. Indeed, of the 20,194 companies included in the report, a mere 1.3 percent had female founders, and only 6.5 percent had a woman as their CEO. “I continue to be surprised that there aren’t more venture-backed companies with women CEOs,” stated Cameron Lester of Azure Capital Partners in an interview with The Wall Street Journal. Lester cites the lingering bias that women encounter in the tech business environment, which he describes as still favoring male computer science majors and engineers. Combine this bias with the fact that women are shying away from computer science as both a major and a career, and the necessary conclusion is that women still face significant barriers to career advancement and opportunities for business leadership.

According to Bloomberg Businessweek, only 12 percent of American female college graduates majored in computer science in 2011. In addition, Forbes reports that, while women are holding more positions at tech companies, the majority of these positions are in marketing, sales, and HR departments.

Fittingly, two entrepreneurial women—Harvey Mudd College’s president Maria Klawe and founder of Piazza Technologies Inc. Pooja Sankar—have started a company to address the scarcity of women in technology and computer science. Dubbed WitsOn (Women in Technology Sharing Online), this company seeks to build a community of female computer scientists, engineers, chemists, physicists, and biologists who can reach out to and support each other in academic and career endeavors. Klawe and Sankar’s efforts, in conjunction with the small yet significant statistical evidence that women are gaining ground as business executives, indicate that women's opportunities for business leadership in technology and beyond is a promising work-in-progress.

"Do Women Make Startups More Successful? If So, How?" forbes.com, October 9, 2012, Christine Perkett