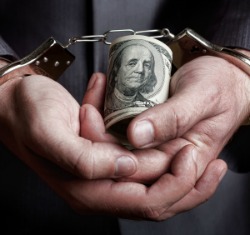 From the way they conduct business to the way they interact with employees on a daily basis, male and female chief executive officers are different in many ways. A recent study revealed that the two are even different when it comes to involvement in corporate crimes.

According to Penn State News, researchers from Washington State University and Penn State analyzed seven years of data from the U.S. Department of Justice. Information included details from approximately 83 corporate fraud cases as well as defendants' gender, position at the company, involvement in the conspiracy and information about the conspiracy network. Researchers found that women are less likely to be involved in corporate crime and fraud and in cases where women were involved they did not play a significant role in the conspiracy. Most conspiracies were all-male and no report of an all-female conspiracy was found in the database.

Moreover, the study also found that men tended to profit more from corporate crime or fraud than women did. Penn State News noted that more than half of females who participated in a corporate scheme made either no or very little money, compared to 26 percent of males who earned between $500,000 and $999,000. Thirty-three percent of males made more than $1 million.

Darrell Steffensmeier, professor of sociology and criminology at Penn State and lead researchers on the study, stated that the difference may be due to the fact that men and women differ in risk preferences and moral stances, noting that men are usually more motivated by money and status. John Warren, vice president and general counsel of the Association of Certified Fraud Examiners (ACFE) who conducted a separate survey in 2012 of some 1,400 global fraud cases from the ACFE, echoed Steffensmeier's speculation in Bloomberg Businessweek and added that men typically carry out their criminal activities much longer than women.

"In general, when women in our study were committing fraud, they tended to do it for immediate financial need," explained Warren in Bloomberg Businessweek. Once the need was fulfilled, women tapered their criminal activity.

In Penn State News, Steffensmeier stated that the findings suggest that having more women in executive roles could raise ethical standards at corporations.

"There is reason to believe that over time increasing the number of female CEOs would reduce corporate corruption because women tend to promote a more ethical business climate rather than one that promotes personal and corporate profits at all costs, no matter what the potential societal costs or harms might be," said Steffensmeier.

In addition to differences in moral values, Penn State News reported that women tended to be excluded from networks conducting high-level corporate crimes.

"Women are less likely to be recruited as co-conspirators in male-orchestrated schemes and less likely to be able to recruit co-offenders should they wish to initiate a corporate fraud," said Steffensmeier in Penn State News.

Interestingly, however, Bloomberg Businessweek pointed out that Warren's survey found that women had more involvement when it came to individual lower-level corporate crimes, such as forging a president's signature to steal company money or filing false information in order to gain a profit.