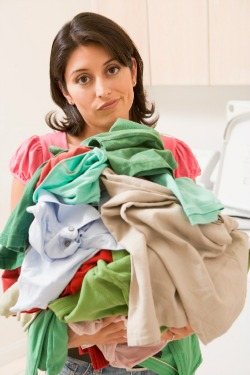 Despite conventional wisdom that says that work is a stressor for both men and women, a new wave of research shows that women in particular feel far more stressed at home than when on the job. The study, which was conducted by researchers at Penn State University, measured the cortisol levels of 122 participants both during the week and on the weekend. As SheKnows recently noted, the study concluded that levels of the stress hormone were actually lower across the board for women and men during work hours. According to the study, when asked, women also reported feeling happier at work than at home. Men reported the opposite feeling. But why?

"Women continue to do more work in the household and have less leisure time there than men," lead researcher Sarah Damaske, Ph.D. told SheKnows. "That means that when they come home from work, they are maybe feeling more harried than men are."

The Penn State study also shows that kids can impact perceived workplace stress and happiness. According to the study, non-parents actually exhibited a larger decrease in stress levels when at work. This suggests that, although being a parent can be stressful, a certain amount of happiness can result from the experience, as well.

TIME Magazine argued that lower stress levels at work could be due to the fact that, while at work, individuals have a clearly defined purpose and goals. At home, however, the list of tasks may be nearly infinite with no definite reward.

Researchers hope their findings will guide families toward a better balance between their work and home life. In fact, they hope to relay the message that employees who cut back at work to improve their personal life may not accomplish much. To help employees better balance their lives, a Council on Contemporary Families research brief noted, the authors of the study suggested that "companies should consider adopting family friendly policies that allow workers to continue getting the health benefits of employment while still being able to meet their family responsibilities."

In other words, employers need to offer meaningful benefits to their employees if they want to get the most out of them.

"Telecommuting, paid sick days, paternity and maternity leaves, are all policies that make it easier for workers to retain the health benefits of employment and for companies to retain the financial benefits of having loyal employees rather than having to deal with constant job turnover," explained the research brief.