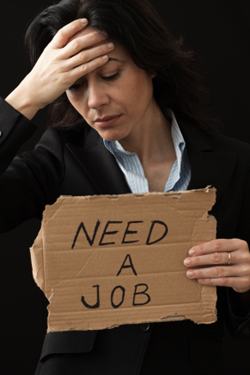 What was once called the "mancession" is now affecting women in more ways than one.

"You have a situation now where the sectors that traditionally employ men have stopped losing jobs and are actually adding them," said economist Dean Baker. "So there's been a reversal. Men really took a very big hit in the first phase of the downtown. But for now it seems that the sectors that are gaining jobs most rapidly are the areas that are employing men."

As the Center for American Progress reported, when the recession first hit in December 2007, men were disproportionally hit as male-dominated industries, such as construction and manufacturing, suffered massive layoffs. However, in recent months, both industries have been adding jobs. Men have also benefitted from private sector hiring. Since the economic recovery officially began in June 2009, private sector employers have hired 503,000 men. Conversely, 141,000 women have lost their job within the private sector. In professional and business services, men have gained 425,000 jobs, but women only added 115,000.

A report by the National Women's Law Center found that while women lost roughly 3 in every 10 jobs cut between December 2007 and June 2009, they have only filled fewer than 1 in every 10 jobs since 2010, when job growth picked up, reported The New York Times.

While overall job growth has been slow for women, proposed cuts in federal, state and local governments are expected to make things worse. Approximately 52 percent of state employees and 61 percent of local employees are women, which means that women will be hardest hit when more jobs are cut in an effort to reduce deficits. Women in local government have already experienced a greater loss, noted the Center for American Progress--since June 2009, women have lost 273,000 local government jobs, but men have lost 47,000. In state government layoffs, however, men lost more jobs than women.

Furthermore, reported The New York Times, it is not only female workers suffering. With reduced public spending comes fewer services for low-income women, such as health services offered by programs liked Planned Parenthood. Cuts in home and community-based care for the elderly will also have a greater affect on women as they usually outlive their husbands.