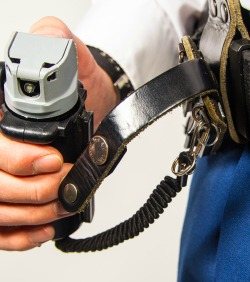 The University of California, Davis is being required to pay $38,055 in workers' compensation to John Pike, the former UC Davis police officer who made headlines for pepper spraying almost two dozen college students during a protest against rising college tuition costs nearly two years ago, the Los Angeles Times reported.

The November 18, 2011 incident caused outrage around the UC system as well as general public. Pike had been recorded pepper spraying 21 students at point-blank during an otherwise peaceful Occupy UC Davis demonstration. The video quickly went viral and caused outrage not only on the UC Davis campus, but also among the general public. As a result, Pike was put on paid administrative leave for eight months and finally fired in July 2012.

According to The Davis Enterprise, a public task force investigation, led by former California Supreme Court Justice Cruz Reynoso, faulted both UC Davis police and administration for their roles in the pepper spray incident. It was determined that Pike's use of pepper spray on the demonstrators was unwarranted and that he had used a spray that was not approved for use by the department at an unsafe distance.

Pike filed for workers' comp, stating that he suffered from depression and anxiety caused by death threats and other harassment he and his family received after the incident. The Sacramento Bee reported that once Pike's identity was revealed, he had been bombarded with calls, text messages and emails. He was even swamped with food delivery orders that were placed in his name.

The Davis Enterprise noted that Richard Lieberman, a Piedmont psychiatrist, rated Pike's disability as "moderate" and concluded that he had suffered "significant internal and external stress" without evidence of substantial improvement. The settlement between Pike and UC Davis was approved by Administrative Law Judge Harter on October 16.

Bernie Goldsmith, a Davis lawyer supportive of the student protesters, criticized the agreement, arguing that it sends the wrong message.

"[The settlement] sends a clear message to the next police officer nervously facing off with a group of passive, unarmed students: Go on ahead. Brutalize them. Trample their rights. You will be well taken care of," said Goldsmith.

As The Davis Enterprise pointed out, Pike will receive more money than those he pepper-sprayed. In September, it was announced that the University of California it would pay the 21 students who were pepper-sprayed $30,000 each. Even after the attorney's fees, Pike will still receive $33,350, reported The Sacramento Bee. Moreover, according to The Davis Enterprise, the former police officer will also receive retirement benefits for his 11 years of service as a campus police officer. At the time Pike was fired, he was making an annual salary of $121,680.

Despite criticism over the settlement, The Sacramento Bee noted that UC Davis campus officials stated that they were following the California workers' compensation process.

"This case has been resolved in accordance with state law and processes on workers' compensation," said UC Davis spokesperson Andy Fell in a statement quoted by the Los Angeles Times.

According to The Sacramento Bee, Jason Marcus, Pike's attorney, did not return calls for comments. Susan Novell, who represented the university, also declined to comment.