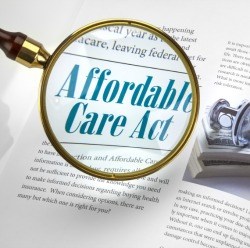 Many American workers have likely heard that the Affordable Care Act, popularly known as Obamacare, could cost the country millions of full-time jobs. Indeed, some employers have already announced they will trim their rosters to avoid extra cost, and many workers worry their jobs could be next. Should they? Maybe not. According to Business Insider and The Washington Post, many of these fears may be largely overblown.

President Barack Obama's well known health care law has not yet fully enacted, but according to The Columbus Dispatch, workers have already begun to fear lost jobs or reduced hours. The issue stems from a provision beginning next year that classifies those working 30 or more hours a week as full-time employees; the current bar is set at 40 hours. Because ACA requires all businesses with more than 50 workers to provide health insurance benefits for full-time workers, the shift could increase cost. Some worry that employers will simply reduce their employee rolls -- or hours -- to sidestep the mandate, and a recent Congressional Budget Office report projecting that the ACA law will result in a 2 percent reduction in worker hours by 2024 has only aggravated these fears.

"There are currently 7.8 million Americans who are working part time but want full-time work," researcher Lanhee Chen of the Hoover Institution at Stanford University told the Dispatch. "The 30-hour rule only makes it more unlikely that these Americans can find the jobs they want and need."

There is just one problem with the notion that the ACA is the jobs killer it has been made out to be, reports The Washington Post: The data -- including the CBO report -- may support it.

"That jobs picture isn't as dire as the law's critics make it seem," writes The Washington Post's Editorial Board. "Millions of people are not going to get pink slips; employers will still demand about as much labor."

The Washington Post suggests that the CBO prediction that workers' hours will be reduced has been widely misreported, or at least misunderstood: The report explicitly states that the reduction will be "almost entirely" from workers choosing to work less, often as a result of reduced health insurance costs. A chart published this week by Business Insider, citing data from Bloomberg, further undermines the idea that the ACA is costing American jobs. According to the report, the United States has added more than 1.8 million full-time jobs over the last year, but only 8 thousand part-time positions.

This is not to say that the ACA is a definite win, just that it is not necessarily a failure. The Washington Post Editorial Board cautions that the ACA is still new, and that all of us -- even the CBO -- will not be able to grasp its full impact until later this year.

"This is for Everyone Who Says Obamacare Is Creating A Nation Of Part-Time Workers," businessinsider.com, February 7, 2014, Joe Weisenthal, Matthew Boesler, http://www.businessinsider.com/full-time-vs-part-time-job-growth-2014-2?utm_source=slate&utm_medium=referral&utm_term=partner