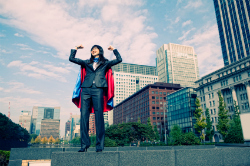 One Central Florida agency has created quite a buzz on the Internet with its latest marketing campaign; so much so that it was the focus of a recent state investigation.

According to the Orlando Sentinel, Workforce Central Florida started a comic book superhero-themed campaign called "Cape-A-Bility Challenge", which featured a cartoon character named "Dr. Evil Unemployment" and included handing out some 6,000 red superhero capes to unemployed workers who visited their offices. The agency also featured videos of employers, jobseekers and the agency's chairman wearing capes on its website. The campaign was said to have cost $73,000.

Many criticized the campaign, calling it a waste of money. Furthermore, some worried that the campaign would cause people to think the state was downplaying the severity of the region's unemployment problems.

"With more than one million Floridians currently out of work, spending any amount of money on collateral materials such as the red capes included in your campaign appears to be insensitive and wasteful," wrote Cynthia Lorenzo, executive director of Florida's Agency for Workforce Innovation, in a letter to Workforce Central Florida Executive Director Gary J. Earl.

According to CFNews13, Workforce Central Florida defended the campaign, saying the agency thought it would help lift people's spirits. The agency also argued that it wasn't a waste of money.

After further investigation and criticism from the public, Workforce Central Florida released a memo on Wednesday to end its Cape-A-Bility Challenge campaign. In the memo, Chairman of the Board Owen Wentworth wrote that the agency would withdraw its "admittedly out-of-the-box creative campaign". Furthermore, he added that the campaign was never meant to offend anyone; instead, it was supposed to help introduce the agency's programs and services to jobseekers and employers. Wentworth also noted that the short-lived campaign was somewhat of a success as new job postings appeared online, new candidates registered for the agency's services and more people used their website.

According to WFTV, this is not the first time Workforce Central Florida has been investigated. Back in 2006, the agency had to pay the federal government almost $3.5 million to settle claims that it misused public money.