Working from Home Could Hurt Your Career 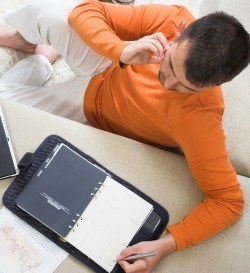 Workers often expect employers to evaluate them based on their performance, however they log their hours. A new study turns this notion on its head -- at least for a growing number of telecommuters.

According to a blog post by The Wall Street Journal, a new study finds that workers who telecommute may lose points with their employers despite technological advances that boost at-home productivity. The research, conducted by University of California Davis professor Kimberly Elsbach and London Business School professor Daniel Cable, found that "passive face time" -- time simply spent in the office, working or otherwise -- improves workers' professional images.

"Just being seen at work, without any information about what you're actually doing, leads people to think more highly of you," Elsbach and Cable wrote in MIT Sloan Management Review, where their research was published. Employees who log hours at home, on the other hand, are often seen as less dependable and productive, even when they use tools like e-mail or Skype to log virtual interactions.

This slight is not intended: Cable told The Wall Street Journal that bosses and peers often do not even realize they are making these judgments. "Without us knowing it, we are creating these assumptions about people based on physical presence," he said.

Unfortunately, actual productivity rarely factors into the equation. "Even when in-office and remote employees are equally productive, our research suggests their supervisors might evaluate them differently because of differences in their passive face time," wrote Elsbach and Cable in the Sloan Review. "Especially in white-collar settings, the presence or absence of passive face time may influence evaluations used to determine the fitness of employees for specific tasks such as team leadership."

The research comes at a time when, according to a separate Wall Street Journal article, more workers than ever are logging at least some of their hours at home. Raymond Boggs, vice president at market-research company IDC, told WSJ that the number of corporate employees who work from home at least one day a month has been growing by an average of 23 percent a year since 2007. Those working from home only one or two days a month are leading the trend: This pool grew by nearly 70 percent each year.

WSJ reports that this growth -- and employers' lack of faith in home-based workers -- has prompted many companies to install monitoring programs on employees' work computers so that they can keep tabs on their employees. Furthermore, technology-research company Gartner predicts that by 2015, 60 percent of employers will use these programs, up from fewer than 10 percent today.

In the end, however, Cable and Elsbach note that employers must realize that they may judge workers unfairly while home-based workers must take steps to safeguard their professional reputations.

"The bottom line is that employees should be wary of work arrangements that reduce their office face time, and supervisors should be wary of using trait-based performance measures, especially when evaluating remote workers," they write in the Sloan Review. "Finally, employees working remotely need to make sure they are evaluated on objective outputs. Barring that, you might consider sending an e-mail to your boss tonight… say, around midnight."

"'Working From Home' Without Slacking Off," online.wsj.com, July 11, 2012, Sue Shellenbarger