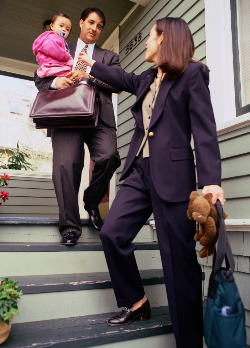 According to The New York Times Motherlode blog, more than 60 percent of mothers work when their children are younger than six years old. Eight years ago, researchers at Columbia University told these mothers that working full-time within 12 months of giving birth would delay their child's cognitive development. Those same researchers, however, are now giving mothers a more positive outlook.

The Washington Post reported that a new child-care study, which is titled "First-Year Maternal Employment and Child Development in the First 7 Years" and is the most comprehensive study of its kind to date, found "that the overall effect of 1st-year maternal employment on child development is neutral".

Researchers examined data for 1,364 children, reported The New York Times Economix blog. In order to account for the many factors that could contribute to a child's welfare, they separated data from non-Hispanic white children and African American children. According to The Washington Post, after tracking child development and family characteristics, researchers found that infants raised by full-time working mothers scored somewhat lower on cognitive tests through the first grade. This negative effect, however, was counterbalanced by several benefits including higher family income and high quality child care. The most important finding was that working mothers displayed greater "maternal sensitivity" towards their children. "We can say now, from this study, what we couldn't say before: There's a slight risk, and here's the three things that you, Mom, can do to make a difference," said Jeanne Brooks-Gunn, lead author of the study.

Brooks-Gunn and her team also found that part-time employment had no negative effect. Working full-time after the first year also did not matter. Brooks-Gunn speculated that because full-time working mothers are away from home and child, they cannot provide "the kinds of intensive interaction that babies require".

Although the study did not look at the effects of working fathers, the findings are still a relief to many. "This particular research has a positive message for mothers that the earlier research didn't," said Brooks-Gunn.