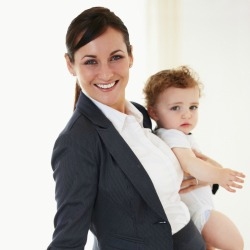 The work-life state of working parenthood is always a popular topic among some blogs and publications as experts try to peg down key trends in this area and what, precisely, they mean. A new report from the Pew Research Center provides what might be one of the clearest pictures yet about what it is like to be a working parent in the United States, though the results are, perhaps, no surprise: Parenting is exhausting, but rewarding, and although dads are more hands-on than in previous generations, women still do most of the house and child work -- even when they work outside the home.

According to The Hartford Courant, the new PRC analysis is based on the Bureau of Labor Statistics' American Time Use Survey, which not only asks respondents how they pass their time, but also how those tasks -- which include work, childcare and leisure -- make them feel. Despite a push toward greater equality, it seems moms still do more at home and with the kids -- and are feeling worn down by it.

"Time spent doing child care revealed the largest gap between fathers and mothers and feelings of exhaustion," report author Wendy Wang, a research associate at Pew, told The Hartford Courant. "Roles are changing, but women are still shouldering the majority of housework and childcare - that is a fact."

Women today spend nearly twice as much time as fathers caring for their kids, notes the report -- 31 hours per week versus 17.3 hours. Men and women do tend to play with their children about the same amount of time each week, but women handle more of the so-called "physical" child work, like bath time, homework help and diaper changes. Men do have an edge in terms of time spent in the office, but both sexes tend to rate office tasks less stressful than childcare. On the other hand, both sexes tend to rate childcare more gratifying, too.

Women are also handling most of the housework, notes the report. Men tend to spend more time than women tending to household repairs -- 4 to 1 hours weekly on average -- but women spend a combined 10 hours more each week cooking and cleaning. All of these extra hours tending to the family and home seem to be taking their toll: Even at leisure, women report being more exhausted.

Wang said that the sample sizes for her analysis were too small to compare the feelings of working parents and stay-at-home parents, reports The Los Angeles Times, but that these gender gaps persisted even when her team considered employment. So why, in this era of working mom super stars like Yahoo! CEO Marissa Mayer, do women continue to shoulder most of the home and family work? Tamar Kremer-Sadlik, and adjunct professor of anthropology at UCLA, chalks it up to societal pressure.

"We are socialized as women to take care of the home," Kremer-Sadlik told The Los Angeles Times. "We are still supposed to be the perfect mom and have a beautiful house."