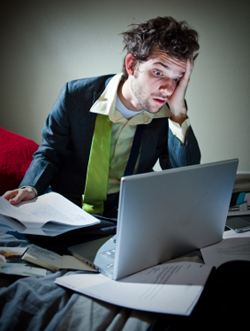 Another long day at the office? Results of a recent study on heart disease might convince you to cut back.

According to HealthDay, researchers at the University College London followed almost 7,100 British civil servants from 1991 to 2004 to determine whether working long hours had an affect on one's chances of having a heart attack. The Los Angeles Times reported that the participants ranged from 39 years old to 62 and were not at risk of coronary heart disease when the study began. Participants were asked how much time they spent at the office, as well as how much time they spent working at home, reported HealthDay. Fifty-four percent said they worked between seven and eight hours a day, 21 percent worked nine-hour days, 15 percent worked 10 hours and a little more than 10 percent admitted to working 11 or more hours a day. By the end of the study, those who reported regularly working 11-hour days or longer were 67 percent more likely to develop heart disease than those who worked the typical seven- or eight-hour day.

While the findings are significant, experts, including the study's co-author Mika Kivimaki, noted that there is no confirmed cause-and-effect relationship between heart disease and working long hours. As CNN reported, there are many other complicated factors that may contribute to the increased risk of heart disease, including stress, inactivity, lifestyle and diet. Indeed, noted Scott Shurmur, M.D., the director of preventive cardiology at the University of Nebraska Medical Center in Omaha, the study did not take into account participants' diets, activity levels or family history of heart disease.

"Somebody who works hard may eat fast food and not be very active, so it may not be the long hours that give them heart disease," explained Stephen Kopecky, M.D., a cardiologist and professor of medicine at the Mayo Clinic in Rochester, MN. "It's eating fast food and being inactive."

The data is also limited as approximately 70 percent of participants were men, most (91 percent) of which were white, reported HealthDay. As a result, the findings may not translate to other ethnic groups and nationalities.

That said, more research still needs to be done before making any changes to patient care. Another area of study could potentially be type of work. Dr. Suzanne Steinbaum, a preventive cardiologist at Lenox Hill Hospital, stated that other research has shown that workers who have little decision-making power or autonomy have a higher risk of heart disease. CNN also noted that whether a person enjoys his or her work may also make a difference. For instance, according to Kopecky, farmers often work 12 to 14 demanding hours, yet they tend to live longer than average.

Still, the data may prove to be helpful in identifying risks early on. By simply asking patients how many hours they work, Kivimaki told CNN that an additional five percent of the people who have heart attacks each year could potentially be identified beforehand.

"Too Many Hours at Work Might Harm the Heart," consumer.healthday.com, April 4, 2011, Ellin Holohan

"Working longer hours may make the boss happy, but it could take a toll on your heart," LATimes.com, April 4, 2011, Jeannine Stein