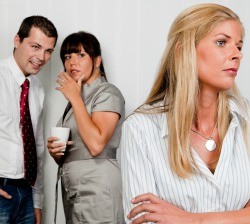 Bullying is often thought of in a school setting -- stealing a classmate's lunch or ridiculing a classmate in front of his or peers. However, bullying is also a major problem in the workplace.

As discussed by The Wall Street Journal a recent University of British Columbia study explains that workplace bullying hurts not only the victim but also the victim's co-workers. Researchers of the study surveyed 357 nurses at 41 units of a Canadian hospital system. Survey results revealed that employees who witness a co-worker being bullied have similar, if not higher, intentions of leaving their job. Sandra Robinson, co-author of the study and professor at the University of British Columbia's business school, explains that "just working in that toxic environment can [have a negative effect]."

How can one identify bullying in the workplace? Workplace bullying can involve verbal threats, public insults, offensive jokes, and even subtle tactics such as piling on job responsibilities. Investopedia adds that bullying can also take the form of intimidation, humiliation, and sabotage occurring as ongoing actions.

Workplace bullying can have serious ramifications for the company as well. For example, The Wall Street Journal notes that according to another study; conducted by researchers at the University of North Carolina, the University of Arizona, and Michigan State University; teammates often unite and retaliate against a supervisor who has bullied someone in the group. Investopedia mentions that workplace bullying can cause the victim to lose self-esteem and potentially incur long-term physical or mental health problems.

Bullying also leads to numerous monetary repercussions for the company. The additional stress and anxiety can decrease targeted employees' productivity and motivation to work. They may take extra sick days or go on extended stress leaves. In fact, researchers from the United Kingdom discovered that workplace bullying contributes to a loss of 18.9 million working days and about 18 billion British pounds every year. The impact on an employee's medical condition can also cost the company in health insurance costs and worker's compensation claims. Unhappy workers will eventually leave the company, leading to high turnover rates and replacement costs. Additionally, if the targeted employee decides to take legal action, the company will incur the cost of legal proceedings and potential damage payments such as the employee's medical costs or lost wages. If the bully is identified, the company may need to incur rehabilitation costs such as anger-management training, team-building activities, and counseling. Lastly, when an employee discusses his or her bullying situation with people outside of work, the company's reputation is impacted, potentially leading to a decrease in sales.

Despite the harmful effects of workplace bullying, as CBS MoneyWatch explains, managers and HR departments typically respond to bullying by ignoring the situation or rationalizing it with the thought that the victim is a poor employee. Managers may hope that the targeted employee quits. However, even if an employee leaves, the bully often chooses a new victim.

Workplace bullying can be a difficult problem to solve. CBS MoneyWatch advises witnesses of bullying to speak up and defend the victim. Managers of the bully should confront the bully and put him or her on a performance improvement plan.

As noted by BeaconHillPatch, the Legislature attempts to solve workplace bullying with its Healthy Workplace bill. The bill reveals that over 59 percent of employees experience workplace bullying or abuse and is intended to protect employees from repeated instances of bullying and harrassment from both employers and co-workers. If the bill is passed, employers who fail to stop the abuse can incur penalties such as a fine of up to $25,000 in damages and reinstatement of the abused employee.