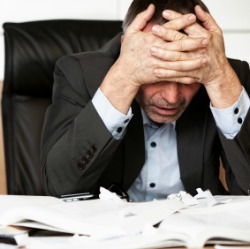 Experts say the economy is improving, so you might expect U.S. workers to be breathing a sigh of relief. Not so, says a new study. In fact, workers are more stressed out than they have been in years, a trend that one research institute has coined “America’s New Black Death.”

Forbes reports that a new study conducted by Harris Interactive for Altierus Career Colleges (formerly known as Everest College) suggests that 83 percent of Americans feel stressed on the job, up from 73 percent last year. This trend has emerged despite positive economic indicators that suggest the job market is improving.

"More companies are hiring, but workers are still weary and stressed out from years of a troubled economy that has brought about longer hours, layoffs and budget cuts," John Swartz, regional director of career services at Altierus Career Colleges, said in a press release published by GlobeNewswire.

The top source of tension: Inadequate pay. According to Forbes, 14 percent of participants say low salaries stressed them out more than anything else, up from 11 percent last year. Annoying co-workers and long commutes tied for the second-biggest stress factor among participants (11 percent), followed by dissatisfaction with career choice (8 percent), poor work-life balance (7 percent), and limited advancement potential (6 percent). Fear of being fired was the least-cited workplace stressor, at just 4 percent.

The survey also analyzed stress levels and contributors across a range of demographics. Women were more likely to name low pay as their primary workplace stressor, which Forbes notes is not unexpected in light of recent reports suggesting that women still earn less than men. Income levels and education attainment also had an impact: Participants with a high school diploma or who earn less than $35,000 a year are much more likely to rank inadequate pay as their top driver of workplace stress. College-educated participants and those making more than $100,000 a year were more likely to attribute it to an unreasonable workload.

While this year’s survey results are new, the recognition that American workers are stressed out is not. According to NBC News, stress is considered so prevalent and dangerous that the American Institute of Stress compare it to the plague that swept Europe in the mid-14th century.

"If black plague is what killed most people in Europe in the Middle Ages, then stress is what's killing us the most right now," Dr. Daniel L. Kirsch, the president of the institute, told NBC News.

Of course, not everyone reports feeling stressed. According to Forbes, 18 percent of workers making more than $100,000 a year and 9 percent of those earning less than $35,000 a year say they are stress-free in the workplace.

The GlobeNewswire press release reports that Altierus Career Colleges' 2013 Work Stress Survey was conducted by phone by Harris Interactive earlier this year. A total of 1,019 U.S. workers age 18 or above participated.

“Workplace Stress on the Rise With 83% of Americans Frazzled by Something at Work,” globenewswire.com, April 9, 2013