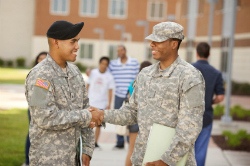 According to the Yale Daily Bulletin, the new Navel ROTC unit, which will be the only unit in Connecticut, is slated to start in the fall of 2012. In recent years, students were only able to take military courses on other campuses. With the new program, students will now be able to receive both instruction and training on campus. Furthermore, the program will be open to both Yale University students as well as students from other public and private institutions in the state.

"The renewal of a formal relationship with Yale will serve to bring dozens of new and talented officers who will carry on Yale's tradition of service into the Navy and Marine Corps each year," said U.S. Secretary of the Navy Ray Mabus. "The presence of NROTC will enrich and strengthen both the military and the educational experience of all students."

The New York Times reported that, like many other colleges, Yale University banned the ROTC program during the Vietnam War. In recent years, the program has been kept off campus due to opposition of the military's "Don't Ask, Don't Tell" policy. However, according to the Yale Daily News, administrators began talks with the armed forces shortly after the policy was repealed in December 2010.

The agreement was supported by faculty members and students alike. A student body survey, conducted by a Yale College Council committee, revealed that an overwhelming majority--70 percent--supported re-establishing a ROTC program on campus.

"I'm delighted to have Navy ROTC return to Yale after a long hiatus," said Yale College Dean Mary Miller in an email to the Yale Daily News. "This agreement marks a new day for Yale."

According to the Yale Daily Bulletin, the Yale NROTC unit will partner with the college of the Holy Cross in Massachusetts to share personnel and support resources.

"New Naval ROTC unit to draw students from across state," yaledailynews.com, May 26, 2011