Your Clothes Could Affect Your Behavior At Work 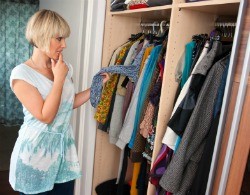 Most of us have been told before that "you are what you wear", so if you want to be taken seriously, dress well. In other words, the clothing that you choose can have a profound effect on how others, particularly those in the workplace, perceive you. A recent study, however, puts a slightly different spin on this concept of dressing for success.

As reported by The Chicago Tribune, researchers from the Kellogg School of Management at Northwestern University found that clothing not only sends a certain message to our colleagues, but can also affect how we feel about ourselves and how we perform certain tasks; a process researchers called "enclothed cognition".

"Clothing can have profound and systematic psychological and behavioral consequences for their wearers," noted the study, reported Life Inc.

According to The Washington Post, study participants were asked to perform the "Stroop test"--were one is asked to identify the color of a word rather than the actual word itself--while wearing a scientist's or medical doctor's white lab coat. Most participants associated these lab coats with care and attentiveness. As a result, the group who wore the lab coats performed better on the Stroop test.

Conversely, a different group of participants who performed the same test while wearing white artists' coats did not perform above average.

While the study does not explore the affects of clothing associated with other professions, The Washington Post noted that the results still have important implications--specifically that clothes often have a symbolic meaning for people, which should be considered when thinking about office dress codes and norms. These policies should be evaluated not just on how others perceive employees, but also on how they make employees themselves feel.

"If you associate [suits and ties] with power and confidence, it's going to have a huge impact," said Adam Galinsky, one of the authors of the study, in The Washington Post. "But for some people wearing suits makes them feel like a phony, as Holden Caulfield would say. So it's really about what the symbolic meaning of the clothes is to the person."

As The Washington Post pointed out, most research on workplace clothing has focused on outside perception, rather than how clothing affects the individual's own behavior. This new study, however, illustrates that it's often a two-way street.

"Although the saying goes that clothes do not make the man, our results suggest that they do hold a strange power over their wearers," wrote the authors, according to Life Inc.

"New study: What you wear could affect how well you work," washingtonpost.com, March 10, 2012, Jena McGregor