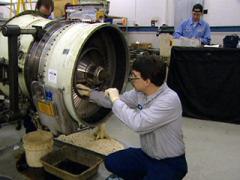 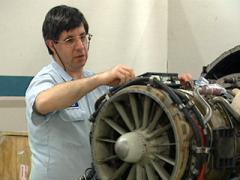 Aircraft Mechanics are also known as: Airframe or Power Plant Mechanics and Avionics or Aviation Technicians. As a valued and critical member of an airline's chain of operations, the primary responsibility of this professional is aircraft preventive maintenance that ensures peak operation, performance, and safety. This is achieved through aircraft servicing, repairing, overhauling, and testing.

A Mechanic performs all required maintenance and inspections of aircraft engines, landing gear, pressurized sections, instruments, and accessories (e.g., pumps, valves, brakes, air conditioning), including parts replacement and maintenance. With larger and more complex planes, the Mechanic will retrieve valuable diagnostic data from the electronic boxes and consoles that track a plane's central or basic functions. They also maintain all records related to maintenance performed on each aircraft. The inspection schedule for each aircraft is based on one or any combination of factors: the number of flight hours that the aircraft has accumulated, the length of time (in days) that have elapsed since its last inspection, and the cycles of operation.

When examining an engine in all plane types, the Mechanic will stand on a scaffold or ladder, or use a lift to reach a special door/opening that allows direct access to the engine in order to examine, repair, or remove it completely. If needed, the Mechanic will disassemble the engine, and with specialized tools and instruments, evaluate various components while looking for any wear or corrosion. X-ray and magnetic inspection equipment may also be used to detect any unnoticeable or invisible cracks. Once the Mechanic's evaluation is completed, they will replace or repair any deteriorated or defective parts.

A Mechanic also evaluates and services various other parts of an aircraft, including:

Once all necessary repairs have been made, the Mechanic will run the equipment through a battery of tests so as to ensure safe and optimal function.

Some Mechanics specialize in repairs where they will find and repair abnormalities or problems as described by a pilot. They work as quickly as safety allows so that the aircraft can get back on track and may safely proceed with its flight. For example, before takeoff, a pilot may discover that the plane's fuel gauge is not functioning properly. The mechanic will locate and diagnose the problem, and through specialized testing equipment, test the electrical system to find and replace any wires that have shorted out or broken.

Aircraft Mechanics will generally work a 40-hour workweek, but on an eight-hour shift and around the clock. They can expect to also put in frequent overtime hours and work on weekends and holidays. These professionals will work in a variety of areas and conditions, such as indoors, on the airfield on "flight lines" (where aircraft are parked for emergency repairs), in hangars, and repair shops. If repairs are to be made rapidly and the hangars are at capacity, the Technician may work outdoors, and at times, in inclement weather conditions.

Physical demands are important element in this profession, as a Mechanic will frequently need to pull or lift heavy objects that can weigh up to or over 70 pounds. Often times, the Mechanic will need to stand, lie, or kneel in uncomfortable positions, crawl under wings, fit into tight spaces, or work in potentially risky positions such as on ladders or scaffolds. When engines undergo testing, planes take off and land, and power tools are being used, vibration and noise can be very loud and uncomfortable, so ear protection is often necessary.

Mechanics are also no strangers to working under pressure or being exposed to stresses. While they work under tight time pressures in order to keep flights as close to their schedules as possible, or keep customers from experiencing any inconvenience, they cannot and must not sacrifice high safety and work standards. The responsibility for maintaining these standards is a tremendous one and can cause stress.

Individuals in this profession must possess the following characteristics and attributes:

According to the U.S. Department of Labor Bureau of Labor Statistics (USDL BLS), employment for Aircraft Mechanics is expected to grow by 10 percent and "about as fast as average for all occupations" from 2006 to 2016. Due to the growing population and an expanding economy, passenger traffic is expected to increase. These factors will have a positive impact on the need and growth of Aircraft Mechanics and Service Technicians. Additionally, through 2016, there will be a need to replace retiring Mechanics, as well as those who will move on to a related field such as auto repair, as their skills are highly transferable into various other repair and maintenance occupations.

The majority of individuals in this profession learn the necessary skills offered through trade schools that are Federal Aviation Administration (FAA) certified. Approximately one-third of the 200 certified schools offer two- and four-year degrees in aviation technology, avionics, or aviation maintenance management. Very few Mechanics learn the trade through on-the-job training. Until an individual secures their FAA certificate, they can work only under the supervision of a certified Mechanic.

As established by law, FAA standards require certified schools to offer students at least 1,900 class hours. Generally, students will attend courses that run between 18 to 24 months and train with tools and equipment that are used on the job.Aircraft trade schools will continue to place a greater amount of emphasis on the technologies, which are increasingly being used in new aircraft construction (e.g., turbine engines, aviation electronics, and composite materials, such as fiberglass, graphite, boron). Learning the principles involved in aircraft operation is also very important, as a Mechanic will often use this knowledge when making repairs. Thus, students will take courses that support these principles (e.g., physics, chemistry, mathematics, computer science, electronics, and mechanical drawing). It is important to note that technological advances in aircraft maintenance enforce the importance that all Mechanics fully understand and develop a solid background in electronics in order to secure and maintain a job in this profession. Mechanics must also possess the ability to read, write, and fully understand the English language, since part of their job includes submitting reports.

For some Aircraft Mechanics, the experience gained while in the Armed Forces will satisfy the FAA work experience requirement to obtain a certificate. However, further study will aid in their ability to pass the certification exam. Generally speaking, jobs held in the military are too specialized and do not provide the vast experience required by the FAA. While few individuals receive credit for what they learned while in the Armed Forces, the majority must complete an entire FAA training program. It's important to note that experience gained while in the military provides an individual with a significant advantage and leverage when looking to secure employment. Applicants with this type of training background are the most desirable and sought after by prospective employers.

All applicants for FAA certification must be at least 18 years of age.

To secure an Airframe or Power Plant certificate, the FAA requires a minimum of 18 months' on-the-job work experience. However, program completion at a mechanic school that is FAA certified may be applied as a substitute for the required on-the-job experience. Additionally, both Mechanics and Technicians are required to pass a certification exam and attend a minimum of 16 hours of training every two years in order to keep their certificate current. Most Mechanics attend training courses that are offered by employers or manufacturers but taught by outside contractors.

To secure a combined A&P certificate, the FAA requires that Mechanics achieve a minimum of 30 months' on-the-job experience working on both airframes and engines, or experience that is combined with completion of a program from an FAA-certified mechanic school. The FAA also requires current work experience (1,000 work hours in the previous two years) in order to keep an A&P certificate valid. Otherwise, a refresher course must be taken. The majority of airlines require Mechanics to possess a high school diploma and an A&P certificate. All certificate applicants are required to pass both a written and oral test and demonstrate that they are able to perform the work as authorized by a certificate.

Avionics Technicians require an FAA mechanic's certificate. Individuals must also be trained, qualified, and possess the appropriate tools required to work on avionics equipment. Many Mechanics possess avionics repair experience from having worked for avionics manufacturers or from the military.

Moving Up the Ladder

As a Mechanic gains experience, they may take on supervisory responsibilities that come with higher-level roles such as Crew Chief, Inspector or Lead Inspector, or Lead Mechanic. Those who possess the authority to perform inspections will have the greatest chance in securing such roles. For individuals in a supervisory role, the opportunity also exists to move up the ladder into an executive position in their company. The FAA also seeks to employ inspectors with a significant amount of experience in various areas ranging from maintenance to overhauls. After completing additional business training, some of these individuals may start their own service facility. Also, since Mechanics continually learn a wide variety of skills, they can leverage their expertise in other industries as Technicians or Repairers.

Mechanics and Technicians will find employment in a limited number of industries. According to the USDL BLS, in 2006, more than one-half of these professionals "worked in air transportation and support activities for air transportation. Around 18 percent worked in aerospace product and parts manufacturing and about 16 percent worked for the Federal Government. Most of the rest worked for companies that operate their own planes to transport executives and cargo."

Major airports that are close to large cities will be the main source of employment for most Airline Mechanics and Service Technicians. Civilian Mechanics who secure jobs with the U.S. Armed Forces will find themselves working at military sites. Those who seek employment for aerospace manufacturing firms will generally find employment in the state of Washington or California. FAA employed Mechanics will work at facilities in Atlantic City, Oklahoma, Washington, D.C., or Wichita.

Schools for Aircraft Mechanics are listed in the column to the left.

Below are the work styles involved in being aircraft mechanics according to their importance on the scale of 1 to 5 (1 being lowest and 5 being highest).

Listed below are the 10 largest metro areas based on the total number of people employed in Aircraft Mechanics jobs , as of 2019

Total employment and salary for professions similar to aircraft mechanics

Our Partner Listings
In this guide
Airplane Mechanic Schools by State

We have some additional detailed pages at the state level for Aircraft Mechanics.